The Stanley Cup is revered not only in hockey, but all of sports.  Chicago Blackhawks defenseman Trevor van Riemsdyk brought the Cup throughout the Jersey Shore to share with fans young and old.  SSZ was on Cup patrol and talked with van Riemsdyk about this special day and his unlikely journey to playing a role on the Blackhawks Stanley Cup title:

van Riemsdyk overcame two major injuries to get on the ice for Chicago in game three of the Stanley Cup Finals and provided key depth on the blue line to help the Blackhawks win the Stanley Cup over the Tampa Bay Lightning.   Trevor signed with Chicago as an undrafted free agent out the University of New Hampshire.  His older brother, James, is coming off a 27 goal season with the Toronto Maple Leafs. 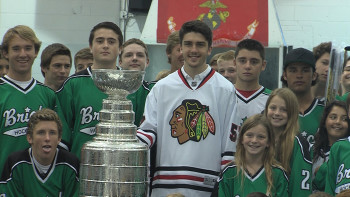 van Riemsdyk began his day with the Stanley Cup at Ocean Ice Palace.  He took individual pictures with every member of the Brick Stars, a Challenger program that features high school hockey players and Point Pleasant Boro coach Alex DePalma working one on one with special needs students. 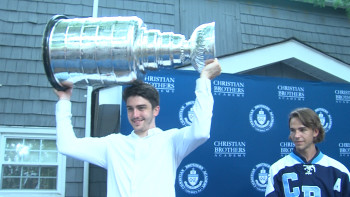 Trevor van Riemsdyk with the Stanley Cup at CBA

In addition to his visit at Ocean Ice Palace, Trevor brought the Cup to Christian Brothers Academy, where he played three seasons for the Colts.  The Middletown native then hosted fans at the Middletown Arts Center.  van Riemsdyk signed a two year extension to remain with the Blackhawks on July 7th. 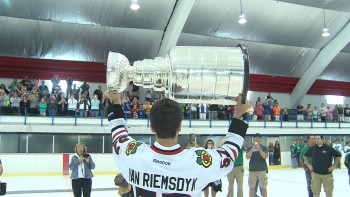 Click above to watch our feature on the Brick Stars Challenger Program, which continues to be supported by James and Trevor van Riemsdyk