Many more interviews and features to come from SSZ Media Day!

It began at 11:00 am with the Keyport Red Raiders and wrapped up just after 6:30 pm with the Jackson Liberty Lions.  In all 40 teams and over 250 athletes took part in Shore Sports Zone’s first high school football Media Day. 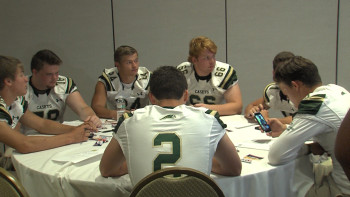 The day got started with players filling out questionnaire forms.  From there, it was a stop at our first video camera where we shot video bump shots of team and individuals.  Players were asked fun questions for our “In the Zone” series and wrapped up with interviews to be included as part of our 2015 previews. 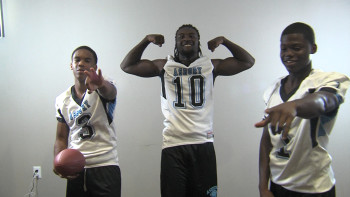 What’s to come on SSZ in August

* Video team previews of every team in the Shore Conference

* 2014 Schedule and Results and SSZ video highlights from last year

* “In the Zone” – fun interviews with Shore Conference football players

With over 6 hours of interviews and footage and nearly 300 interviews, Shore Sports Zone gets to work to preview every team in the Shore Conference.  Coming up this weekend, SSZ will post our schedule of team previews.  Our previews will feature the 2015 schedule, a look back at last year’s schedule along with video highlights shot by SSZ, a video preview as well as player profiles.  A special thanks to iPlay America in Freehold for hosting our Media Day and the SSZ team of TJ Brustowicz, Alex Lorenzo and Chris Melvin for helping to make the event a success.

Most importantly, a special thanks to the head coaches and athletes who made their way to Freehold to kick off the season.  We are excited to bring you high definition highlights and features for the 2015 football season!