Jerry Schulte has over 40 years experience coaching high school football on the Jersey Shore.  The former Mater Dei and Wall Township head man is stepping up after 10 seasons as Rumson-Fair Haven’s defensive coordinator to take the lead as head football coach of the Bulldogs.

Schulte replaces Bryan Batchler, who guided RFH to three consecutive state championships.  On December 14th, Batchler was placed on paid administrative leave nine days after the Bulldogs won a state title at Rutgers in a 21-0 win over Red Bank Regional.  There has been no reason given why Batchler has not been back to work and the ultimate decision not to rehire him as football coach..  While there is a great mystery surrounding the reason for Batchler’s departure, on the field performance was not a factor in the change of command.  In three seasons as head coach, Batchler had a 30-6 record after taking over for Shane Fallon, who is now Holmdel High School’s athletic director. 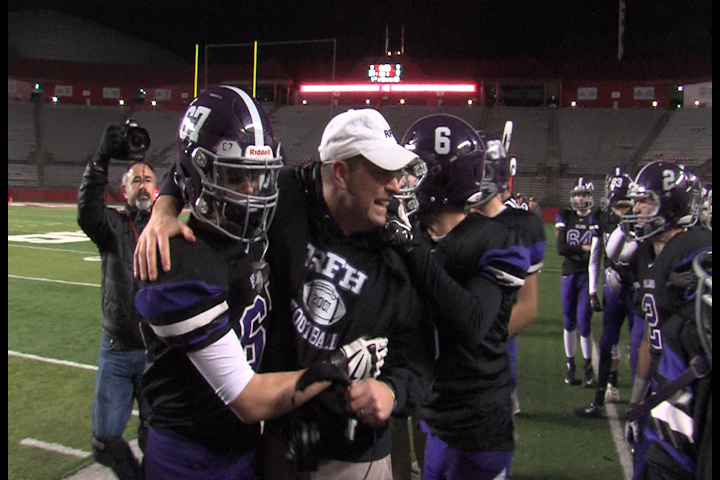 Bryan Batchler celebrates with his players on the field on December 5th, 2015 at Rutgers following a 21-0 win over Red Bank Regional, the Bulldogs third straight Sectional Championship

Schulte has been the defensive coordinator at Rumson since 2005 and his Bulldog defensive units have the reputation as one of the stingiest in New Jersey.  RFH has back-to-back shutouts in state final games and gave up just six points in the first title in the Batchler era in 2013.  While everyone on the administrative side is tight lipped about the Batchler situation, the hiring of Schulte and keeping the nucleus of last year’s coaching staff in place sends a clear message that the foundation of one of New Jersey’s most successful high school football programs in recent years will stay intact.

Schulte’s new post and the return of ten assistant coaches was formally approved by Rumson-Fair Haven’s Board of Education on Tuesday night.

Jerry Schulte on taking over as head coach

“When we first heard about the situation, we talked to all the coaches and our main concern was the staff and the continuity with the kids would remain the same. The administration and Board of Education agreed and I just think it’s a great decision for the kids.”

“I am really excited to have Jerry Schulte as our head football coach.  He has been our defensive coordinator since 2005 and has done an amazing job.  10 assistant coaches from our 2015 coaching staff were also approved, including Charlie Perillo, our offensive coordinator.”