CBA’s Sebastian Rivera comes back from a 4-0 deficit to pin Delbarton’s Patrick Glory with one second left in the match to win the 113 pound New Jersey state wrestling championship.  SSZ was there for the amazing finish along with complete Sunday coverage from Atlantic City

CBA’s Sebastian Rivera brought thousands to their feet at Boarwalk Hall in Atlantic City with his last second pin against Delbarton’s Patrick Glory in the state wrestling finals.  SSZ was there for the match and brings you a recap of the 113 pound state finals: 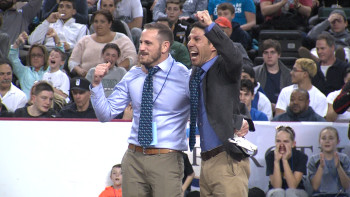 For CBA, it’s their second ever state champion on the mat and first since 1969.  Rivera was the lone Shore Conference state champion.  Toms River East’s Andrew Meyers reached the championship round, but fell to Bound Brook’s Stephan Glasgow:

A total of 12 Shore Conference wrestlers made it to the podium on Sunday in Atlantic City.  Three grapplers won third place bouts including Middletown North’s Anthony Ventrano and a pair of Wall Crimson Knights: