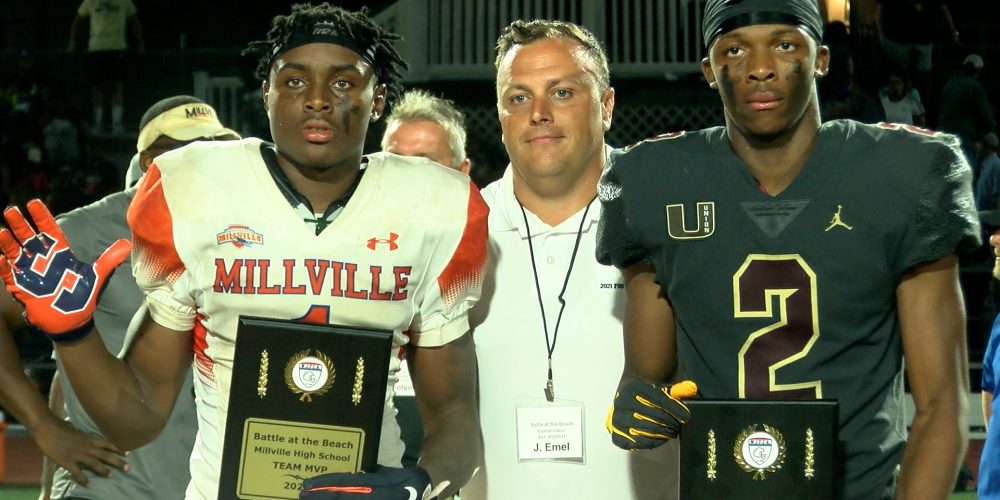 The marquis game from a weekend of football at the inaugural “Battle at the Beach” showcase in Ocean City pitted two of New Jersey’s top public school programs – and the top recruits from those respective schools – against one another in a 31-28 thriller just blocks from the Atlantic Ocean.

Syracuse commit LeQuint Allen led Millville with 113 yards and a rushing touchdown but it was freshman Lotzier Brooks stole the show. Only 14 years old and playing in his first varsity game, Brooks scored on a 65-yard kick-off return touchdown and burned the Farmers defense with an 86-yard touchdown reception in the fourth quarter.

Rutgers commit Davison Igbinosun shined for Union in the loss – he had an interception and his physicality set the tone to a tough, hard-nosed game all night long.

JSZ’s Jay Cook has the highlights from our Week 0 OceanFirst Bank Game of the Week:

Jersey Sports Zone hit the ground running to start the 2021 season and we have highlights from handfuls of games on opening weekend. Subscribe with the JSZ All-Access Pass to watch Friday night’s highlights as well as Saturday’s, too. Our team of MMJ’s will also be out Sunday covering another pair of games from Ocean City.