Long Branch linebacker Brandon Lane had two fumble recoveries to get defensive MVP honors for the South All-Stars in the Phil Simms North-South Classic.  A number of Shore standouts stepped up on the defensive side of the ball.  SSZ has highlights of North’s 7-0 win over the South at Kean University

A first quarter touchdown pass from Seton Hall Prep’s Zack Keller to Pascack Valley’s Mike Pimpinella was the only score of the 2016 Phil Simms North-South Football Classic at Kean University.  The Shore Conference was represented well especially on the defensive side of the ball.  Matawan’s Shawn Ramcheran had an interception and Long Branch’s Brandon Lane had two fumble recoveries to earn South defensive MVP honors.  The defensive award is named after Matawan native Jim Jeffcoat, a former NFL standout with the Dallas Cowboys.  A steady rain fell throughout the second half and the South had numerous opportunities in the red zone, but were never able to get on the scoreboard.  The North had a pair of blocked field goals to earn bragging rights.  Watch the highlights from Monday night: 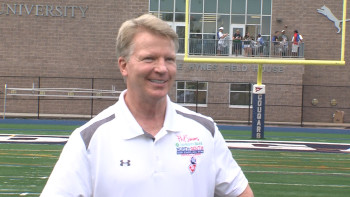