Nick Schutzenhofer won the final match at 106 pounds with a double overtime win to give CBA a 34-28 win over Howell and the Colts first ever Shore Conference wrestling championship.  Great drama at Red Bank Regional and an emotional post-match interview make this a must watch!

Great drama in Little Silver as it came down to the final match in the Shore Conference wrestling finals at Red Bank Regional high school.  Eric Keosseian gave Howell a 28-25 lead when he scored a pin at 220 pounds.  CBA took a 31-28 lead when Will Oxley answered with a pinfall at heavyweight.  The match came down to 106 pounds.  Darby Diedrich topped Nick Schutzenhofer in the regular season.  If Howell scored 3 points in a decision win, the Rebels would have captured the Shore Conference title thanks to a tiebreaker of most pins (Howell had 2, CBA had 1).  Schutzenhofer scored :07 into the second OT period and held on to give the Colts a dramatic win.  Watch the drama unfold and see the raw emotion of Schutzenhofer after coming through to give CBA a memorable title on the mat: 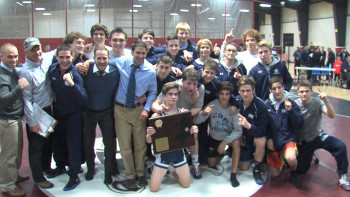 Thanks to Manasquan Bank for covering our Howell Rebels coverage.  We are still seeking a CBA sponsor.  Great moments like what you saw in the Shore Conference wrestling finals will get plenty of views – we need someone to support our CBA highlights so we can show even more Colts features and highlights.  If we had a CBA sponsor, we would have covered the Colts winning the Shore Conference swim title.  Please email rich@shoresportszone.com if you know of a business that can come on board and sponsor the Colts on SSZ.