CBA’s Brendan van Riemsdyk is keeping the family tradition going.   The Monmouth MVP of the Jim Dowd All-Star game talks about his future plans on the ice

RED BANK – Thanks to his two older brothers, Brendan van Riemsdyk knows his last name brings high expectations.  But the CBA forward is making a name for himself among the trio of hockey stars.  Brendan had three goals and one assist in Monmouth County’s 10-6 win over Ocean on August 3rd in the Jim Dowd-All Star game.

His brother James, currently with the Toronto Maple Leafs, was the 2004 Monmouth County MVP.  Trevor van Riemsdyk, currently in the Chicago Blackhawks organization, was the 2009 Monmouth MVP.  Brendan has the family bragging rights with MVP honors in 2013 and 2014.

Brendan will follow his brothers path to play college hockey at the University of New Hampshire.  He’ll spend a year with the Islanders Hockey Club in the USPHL before going to UNH and play in Hockey East.

“I like to blaze my own trail a little bit, but it’s definitely a huge honor just playing at a great University like that,” Brendan van Riemsdyk said.  “James and Trevor have been there so it gives me that comfortability level there so it just makes it that much easier of a transition.” 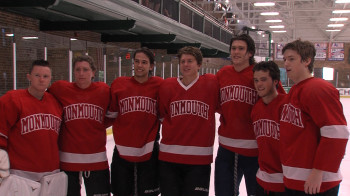