Jarrett Birch scored four straight goals in the second half to help Manasquan to a 12-8 win over Southern Regional in the Shore Conference Boys Lacrosse semifinals.  SSZ has full highlights and post-game reaction in our Manasquan Bank Game of the Week from Long Branch High School plus highlights of top seed RFH holding off a late rally from CBA in the other semifinal

Jarrett Birch scored four straight goals in the second half to put the Warriors ahead for good and earn a spot in Monday’s championship game.  Southern Regional put together three straight goals at the end of the second quarter including a James Manzo score with 10.9 seconds left to take a 6-5 lead at the half.  The third quarter saw the Warriors outscore the Rams 3-0 and Birch scored all three.  He finished the game with 5 goals and now has 68 for the season.  Watch extended highlights and an interview with Jarrett Birch in our Manasquan Bank Game of the Week: 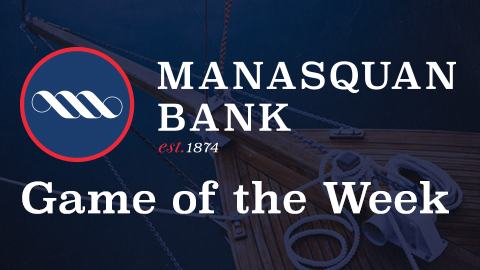 Thanks to all the Manasquan Lacrosse fans for voting the Warriors game against Southern for this week’s Manasquan Bank Game of the Week.  Each week we put different games involving schools located near a Manasquan Bank branch and the winner of the poll gets a visit from SSZ cameras for highlights and interviews.  Coming up next week, we’ll spotlight the Shore Conference baseball tournament opening round.

Rob Garavente scored three goals and RFH goalie Kyle Knapp had 15 saves to get the top seed in the finals.  The Bulldogs had a 3-2 lead at the half and took a 5-2 lead early in the 4th quarter before CBA mounted a comeback.  John Salcedo and Nick Casner scored to get the Colts within 5-4.  In the final minute, Casner had two chances to draw even, but Knapp made a save and the RFH defense created a turnover resulting in a long pass ahead to Henry Sillen who scored an empty net goal in the final seconds.  Watch the highlights from a game that went down to the wire: