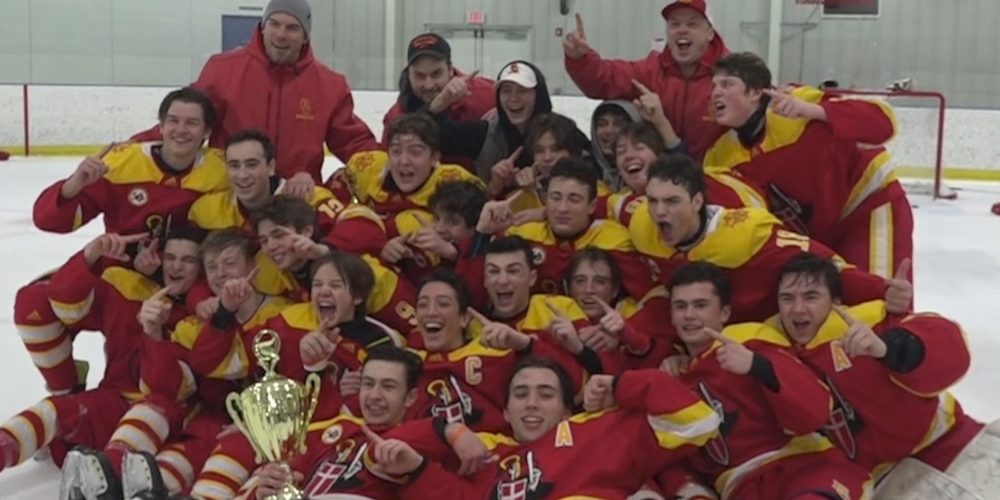 It’s hockey night in New Jersey and the JSZ team was on-hand for three great matchups from all over the state. Watch a memorable night in Bergen County, a South Jersey stalemate and a red hot goalie in Middletown

The Crusaders got early third period goals from Antonio Arcaroli and Nick Chiurazzi to end the eight-year reign of Don Bosco Prep as county champs. Bergen Catholic was blanked 4-0 by the Ironmen earlier in the regular season but turned the tables against their archrival. JSZ has the thrilling highlights and post-game reaction from the Wayne Ice Vault:

The Hermits needed a late power-play goal to force a draw with Gordon Conference foe Gloucester Catholic. St. Augustine fell into an early two-goal hole but reeled off three consecutive goals to take the lead early in the third period. Gloucester Catholic scored twice in just over a minute to retake the lead before Chris Cipparone netted the game-tying goal.

JSZ’s James Mooney has the highlights from Mount Laurel:

Matt Corella had 42 saves and John Miranda scored a pair of goals in the span of 40 seconds late in the second period to give Middletown North a critical win as it looks to qualify for post-season play. Miranda scored with 1:01 left in the second and followed it up after a great feed from John Betz 40 seconds later to make it 4-1 North at the end of two periods. Southern scored a pair of goals in the third on a Lions own goal and a Christopher Laureigh tally but Corella was able to preserve the win and get Midd. North to 6-7-2 on the season. JSZ’s Rich Chrampanis has the highlights from Middletown Ice World:

Jersey Sports Zone is excited to have ACI Medical & Dental School join our team and present our Central Jersey Game Balls all year long in addition to allowing us to bring great highlights and features to Rumson-Fair Haven and Middletown North. One of the top technical schools in NJ, Advantage Career Institute Medical & Dental School in Central New Jersey offers a variety of programs in the in-demand medical and dental industries.  Visit ACI.org to learn more!