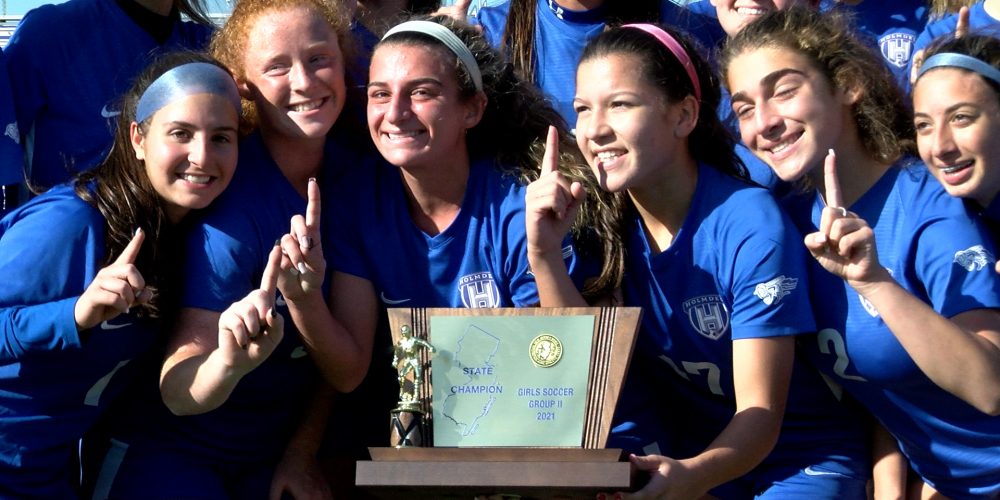 It’s the end of the soccer season and New Jersey crowns four state champions. JSZ has full highlights from each game on Championship Sunday. Thanks to OceanFirst Bank for sponsoring our coverage!

Wayne Valley (22-3) captured the Group 3 State Championship with a 2-1 overtime victory over Princeton (21-3). Emily Jozak and Sophia Lis traded goals in the first half to tie the match at 1-1 heading into halftime. However, defense was the story of the afternoon, Princeton keeper Moji Ayodele finished with 12 saves while Astrid McGraw had 5 saves for Wayne Valley. After 80 minutes were not enough, sophomore Izzy Rathjen netted her first varsity goal in O.T. to lead the Indians to the program’s first ever State Title. JSZ’s Nery Rodriguez has the highlights from Kean University:

Juliana Kolbasovsky’s incredible playoff run continued into the state championship. The senior delivered a pair of goals to lift Holmdel to its first state title since 2014. Hornets’ head coach John Nacarlo has now won state championships with boys the girls and boys varsity programs at Holmdel.

Alyssa Martinez etched her name into Westfield history on Sunday in a battle between the top two teams in the NJ state rankings. The Rutgers-commit netted the game-winning goal with eight seconds left in regulation as the Blue Devils capped off an undefeated season with its first state title since 1988. Sutton Factor picked up the clean sheet in net, finishing with seven saves in the win for Westfield (21-0-1).

JSZ’s James Mooney has the highlights and reaction from Kean University:

JSZ’s coverage of Westfield is brought to you by Assemblyman Jon Bramnick.

Ava Agresti’s golden goal in the 85th minute capped off an epic comeback to give the Blue Devils a state championship. Mountain Lakes took a 2-0 lead in the second half on a pair of goals by Henna Andican. Shore rallied with two goals in the span of 37 seconds. Mia Agresti’s corner was knocked in by Barbara Grimm and Mia added a 30 yard rocket to draw the Blue Devils even. Younger sister Ava got the heroics in overtime thanks to a feed from Lauren Saponaro. JSZ’s Rich Chrampanis has the highlights and post-match reaction: