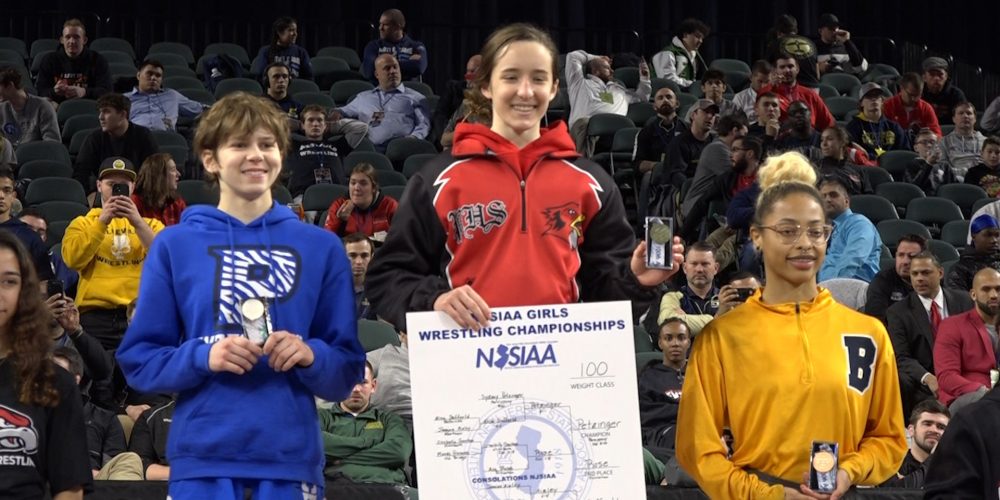 Welcome back to A.C., New Jersey wrestling fans! Jersey Sports Zone’s team of MMJ’s has wall-to-wall coverage of every single girls state final as New Jersey will crown champions for only the second year. Stay tuned throughout the night as the highlights come in!

Sydney Petzinger’s reign atop the 100-pound division continues as she pins Ava Rose in the third period to clinch her second-straight state championship and remain undefeated in her career in girls competition. JSZ’s James Mooney has the highlights:

Coverage of Princeton is brought to you by Princeton Orthopaedic Associates.

Princeton’s Chloe Ayres wins her second State Title as she downs Johnae Drumright of Trenton Central 4-3. Ayres secured a takedown in the third period to take the lead.

Kira Pipkins might be listed as a freshman, but the Bloomfield 114-pounder certainly looked like she had plenty of experience on the mat. Pipkins beat the regulation buzzer with an escape to force OT and then hit the title-winning shot in the first SV period. JSZ’s Jay Cook has the highlights:

Stephanie Andrade came into the State Tournament with high expectations and she did not disappoint. Andrade captured her second State Title with a first period pin in the finals over Avery Myers of Jackson Memorial.

Coverage of Jackson Memorial is brought to you by Louro Chiropractic Center.

Emma Matera took a one-point lead into the third period, and then rode out the defending state champion Gabby Miller to win her first state crown. JSZ’s Mike Frankel has the higlights:

After winning the state title at 136-pounds a year ago, Jess Johnson conquers a new weight class as she defeats Precious Opara to win the state championship at 151-pounds. JSZ’s James Mooney has the highlights:

After falling short of a state title a year ago, Kerly Borbor buckled down to score a thrilling overtime victory. Borbor became the first wrestler in New Brunswick history to win a state championship. JSZ’s Jay Cook has the highlights:

Undefeated senior Sandra Guerrero had won all of her matches by fall leading up to the state final. It took the full six minutes against Joelle Klein, but that just makes a state title even sweeter for Guererro. JSZ’s Mike Frankel has the highlights: