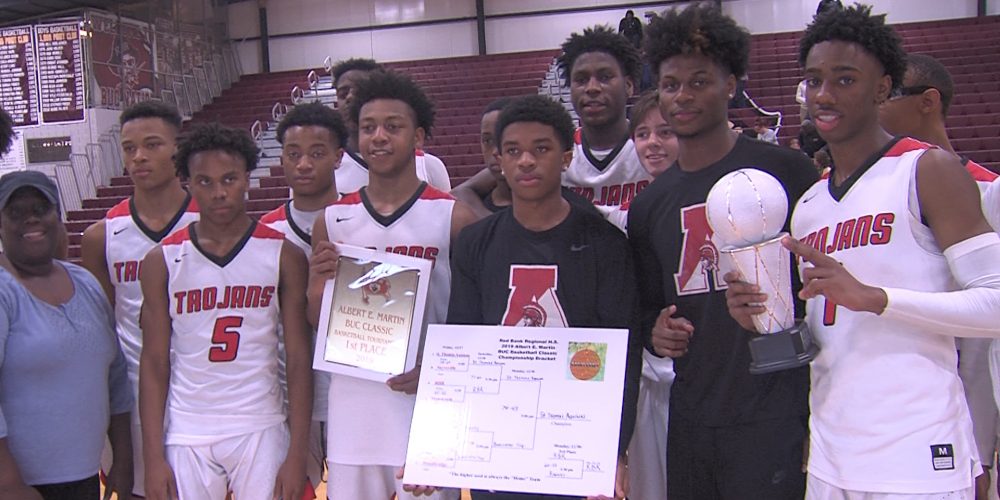 We keep it rolling with more holiday hoops action to finish 2019 with a bang! Check back throughout the night for all of the exciting highlights. JSZ wishes you a Happy New Year!

Quadry Adams and Jaquan Harris combined for 40 points to give the Trojans a convincing championship win at the Albert E. Martin Buc Classic at Red Bank Regional. Sophomore Harris had 19 points and senior Adams, a Wake Forest commit, earned MVP honors after a 21 point effort. St. Thomas Aquinas is now 5-1 with its lone loss coming to Bergen Catholic. JSZ’s Rich Chrampanis has the highlights from Little Silver:

Sophomore Ben Roy and senior Alex Galvan combined to score 52 points (26 points each) as Manasquan pulled away in the fourth quarter to bring home some hardware to close out 2019. Roy was named the tournament MVP while Galvan was selected to the tournament’s first team.

JSZ’s Jay Cook has the highlights from Toms River:

Destiny Adams had 31 points and 16 rebounds in a dominating performance to win MVP honors for a third straight year and the Hawks have a three-peat in Toms River at the WOBM Christmas Classic. RBR reached the girls’ final for the first time in program history. JSZ’s Kenneth Bradley has the highlights:

The Crusaders cruised to their third win of the season, beating the Thunderbolts to help close out the Red-Blue Holiday Mixer. Jerry Surrency scored a game-high 18 points in the victory. Trey Simmons added 13 points, while Jimmy Reilly chipped in with ten. Randy Butler scored ten points for Millville in the loss.

JSZ’s Mike Frankel has the highlights from Williamstown:

After suffering a crushing one point loss in the Huskies Holiday Classic, Holmdel has picked up back to back wins to start the season 3-1. The Hornets defeated Edison 66-38 behind an unstoppable scoring attack led by Jack Giamanco. Giamanco finishing with 18 points helped push the deficit to 30 by the fourth quarter. JSZ’s Nery Rodriguez has the highlights from Matawan Regional High School:

Thank you to the Law Offices of Lawrence William Luttrell for sponsoring our Holmdel coverage.