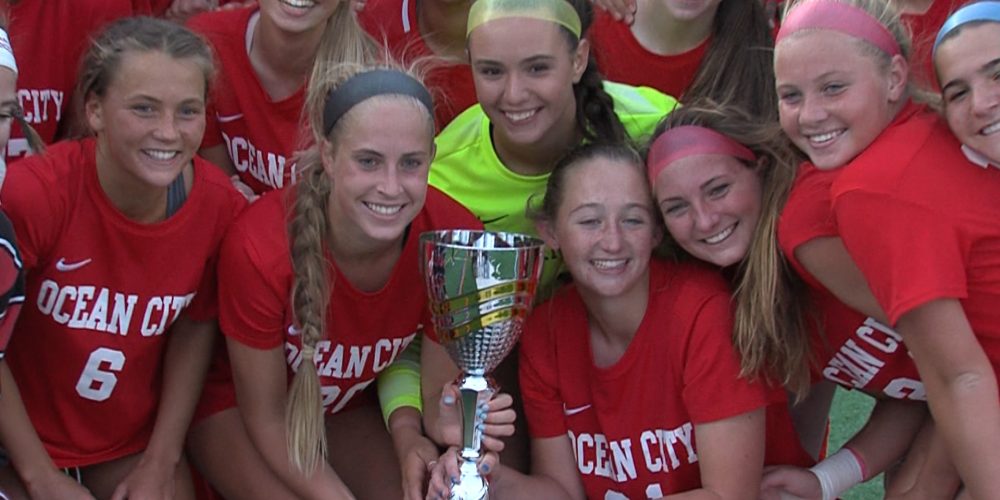 Jersey Sports Zone brings you four soccer games around the state thanks to our great sponsors.

The Mustangs snapped the Red Raiders’ 45-game unbeaten streak with a dramatic 2OT win last week, but OC gets its revenge with a trophy on the line. Kasey McDonnell and Monmouth commit Summer Reimet both scored goals in the first half, while keeper Tori Vliet earned a clean sheet.

JSZ’s Mike Frankel has the highlights and reaction from the Cape-Atlantic League Tournament championship game:

The Girls Game of the Week is made possible by OceanFirst Bank.

The Eagles trailed 2-1 at halftime but stormed back in the second half to knock off the Blue Devils and win the CAL Tournament title. Gilmer Mendoza scored a pair of goals, including the go-ahead goal, to lead EHT in the win. Carter Bailey and Sernio Aumento each scored a goal for Hammonton in the loss.

JSZ’s James Mooney has the highlights and reaction from the Cape-Atlantic League Tournament championship game:

The Boys Game of the Week is made possible by OceanFirst Bank.

Nottingham (2-11) defeated Trenton Catholic (7-4-1) 1-0 in overtime to advance to the Mercer County Tournament. After 80 minutes the match remained scoreless, less than a minute into O.T., Musa Musa scored the game-winning goal for the 18th seed Northstars as they will take on second seed Notre Dame (12-1) in round one. JSZ’s Nery Rodriguez has the highlights and postgame reaction:

Thank you to Princeton Orthopaedic Associates for sponsoring both our Nottingham and Trenton Catholic coverage.

Max Dyba scored late in the first half and Charles Latendorf added a tally early in the second half off a corner to give Point Pleasant Boro a regular-season finale win against their crosstown rivals. JSZ’s Rich Chrampanis has the highlights from Point Pleasant: