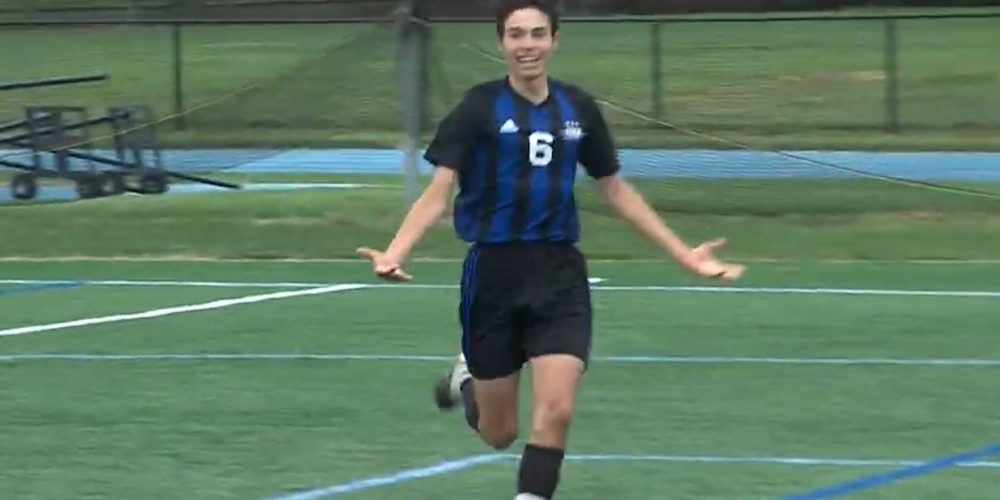 The 2020 season will be forever remembered in New Jersey. Not because of the missing true state championships, but due to the resiliency of programs and players all season long. JSZ’s Summer Recap Series of the 2020-2021 scholastic season continues with our top boys soccer games of the year. “Unofficial” champions were crowned, crossover games between unfamiliar opponents happened and wild finishes were a thing of the norm.

Here are our picks for the Top 10 boys soccer games of the 2020 season!

Kevin Kiernan scored 27 goals in his senior season at Southern, and none might have been bigger than his overtime golden goal to top Toms River North on Nov. 9. Kiernan broke a 3-3 tie after creeping into the box and nailing the game winner. JSZ’s Mike Frankel had the call:

No. 9: Incoming Dusk Ends Top Matchup Between GSB and Monroe

The only blemishes on the final records for Gill St. Bernard’s and Monroe were both due to this wild, 94-minute battle in Gladstone on Nov. 9. The Knights clawed back in late in the second half to tie the match at three and then a lack of sunlight and a fast approaching dusk would force the game to be called in overtime. JSZ’s Jay Cook was on the highlights:

No. 8: Clifton’s Unbeaten Streak Gets All The Way Up to 33 Straight

At one point in the 2020 season, Clifton was ranked among the top high school teams in the country. Their illustrious win streak reached as high as 33 games on Nov. 3 in this 6-3 victory over Kearny. Four days later, the Mustangs would lose to Ramsey, thus ending that unbeaten streak. JSZ’s Jay Cook had the highlights:

Delbarton is one of the most decorated programs year in and year out in New Jersey. Though no “true” state champions were crowned in 2020, the Green Wave still were able to win a regional playoff tournament to close their COVID-shortened season. Curt Calov led the Green Wave with a pair of goals in a 7-2 win over Morris Catholic back on Nov. 21. JSZ’s Jay Cook was on the call:

The Mounties showed their ability to handle a serious level of adversity with their backs up against the wall in this playoff contest on Nov. 19. After falling behind two goals to a surging Kearny team, Montclair rallied with four straight goals to win a close game and advance. They ultimately would win a regional championship two days later against Livingston. JSZ’s Jay Cook had the highlights:

No. 5: Grello is Golden in Delran’s 2OT Win over Rancocas Valley

The Den is one of top soccer pitches in all of New Jersey high school sports. It’s also a place when Andrew Grello delivered one of the best, clutch goals of the 2020 season. Grello’s beautiful goal in double overtime was the difference in a heart pounding, 2-1 victory over fellow Burlington County foe Rancocas Valley on Oct. 5. JSZ’s Mike Frankel was there to tell the story:

Johnny Hart was the star of the show anytime JSZ cameras showed up to cover Pinelands boys soccer. That was exactly the case on Oct. 20. Hart’s beautiful free kick bent around a wall of defenders and hit the back of the net to finish off a 2-1 double overtime victory for the Wildcats. JSZ’s Mike Frankel had the highlights and more:

Having one of the best seasons in program history is always an incredible feeling – but doing it during a global pandemic was even more impressive. Middlesex finished off a perfect 17-0 season on Nov. 21 with a rousing 7-1 victory over Brearley. JSZ’s Nery Rodriguez had the coverage from the GMC:

This battle between two of New Jersey’s top public schools was everything we could have asked for, and more. Zach Martinho delivered what seemed to be the biggest goal of his high school career to lift his Falcons by Elizabeth in a nail-biting 3-2 double overtime final on Nov. 21. Monroe finished the year with a regional championship and a 14-0-1 record. JSZ’s Nery Rodriguez was there for this incredible game:

No. 1: Gill St. Bernard’s Secures No. 1 Ranking in NJ With Close Win over Rival Pingry

There were no doubts about who the No. 1 team in New Jersey was after Nov. 21. Gill St. Bernard’s closed out the best season in program history after a 3-2 victory over their top rival Pingry in Somerset County. Micaah Garnette, Gavin Scavino and David Frankel all scored goals to lead the Knights to a regional championship and a win this team would never forget. JSZ’s Rich Chrampanis was on the highlights: