The 2018 Jersey Sports Zone banquet celebrated a stellar season on the gridiron in the Garden State.  The APA Hotel in Woodbridge honored the best of the best from every part of the state and culminated with our version of the Heisman.  Watch all the videos from a special night to honor the newest members of the JSZ All-Zone fraternity!

After a stellar senior year with Somerville, a majority of coaches and credentialed media from around the state selected Jalahn Dabney as the 2018 Zoneman Trophy winner.  Dabney amassed 3,444 all-purpose yards and 55 touchdowns for the Pioneers this season. JSZ’s Jay Cook has the interview with Dabney along with other players selected to JSZ’s All-Zone team.

Before the Zoneman banquet action kicks off check out our pre-show interviews with JSZ’s Nery Rodriguez: 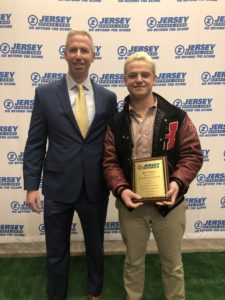 Jersey Sports Zone’s Zoneman Trophy was presented by NJM Insurance.  Thanks to their support of South Jersey high school sports all year long!

With over 50 high school coaches around the state and more than 20 statewide media members, the ballots were cast just like the Heisman.  3 points or 1st place, 2 points for 2nd and 1 point for third.

In case you missed it, watch JSZ’s profile of our six Zoneman Finalists:

Alfano has been the consensus top-ranked 2019 football recruit all season long and there’s good reason why. He is one of five New Jersey players selected to play in the 2019 All-American Bowl and is committed to play for Nick Saban’s Alabama Crimson Tide. Alfano dominated his competition in the Greater Middlesex Conference with 79 tackles and 10 sacks this season, along with a staggering 28 tackles for losses. JSZ’s Jay Cook gives you the inside-look at what makes Alfano such a highly-touted prospect:

Byers was as electric as they come in the Garden State during his junior campaign. He looked like he was shot out of a cannon with the ball in his hands, rushing for 1,741 yards and 29 touchdowns on the season, all while helping power his St. Joe’s Wildcats to yet another Non-Public Group 2 championship. JSZ’s Nery Rodriguez takes you down to Hammonton for a behind-the-scenes look at South Jersey’s most electrifying runner:

Dabney took over the starting quarterback job in Somerville at the end of the 2017 season and showcased his dynamic playmaking ability well throughout 2018. He compiled 3,444 yards from scrimmage this season and reached the end-zone 56 times to lead one of New Jersey’s most dangerous offenses. JSZ’s Courtney DuPont tells us what makes this dual-threat quarterback tick:

Kargman will graduate from Woodrow Wilson with plenty of state records compiled during his senior season. The decorated South Jersey passer broke the state record single season passing mark with 3,963 yards and his 41 passing scores rank atop the state lists, as well. But what’s even more impressive is Kargman’s character off the field, as it’s made him an important part of the Woodrow Wilson community. JSZ’s Nery Rodriguez tells us what makes Kargman so special:

Johnson became the first Bergen Catholic rusher to break the 1,000-yard mark since 2008, a true testament to the level of competition that the Crusaders face on a week-to-week basis. After teammate Josh McKenzie went down with a torn ACL, Johnson assumed the full-time starting role and showcased his elite speed and craftiness all season long. He closed 2018 with 1,334 yards and 11 rushing scores. JSZ’s Jay Cook has the story about this humble teammate and Nebraska commit:

Intelligence and athleticism is the blend of characteristics that has made Lubischer one of New Jersey’s most talented signal callers. At Red Bank Catholic, Lubischer blossomed into a premier dual-threat passer who had the ability to break the game on any down. JSZ’s chief operating officer Rich Chrampanis followed Lubischer’s trajectory all season long and tells us why this Boston College commit is so special:

Only the top-six vote-getters are on our Zoneman podium, but there were other plenty of players around the Garden State who had great seasons and garnered votes from coaches and media around the state. Those players were:

7th Place: Taquan Roberson, DePaul Catholic quarterback: Roberson, a Penn State commit, closed out his senior season in masterful fashion for the Spartans. He threw 29 touchdowns for 2,432 yards and will go down as one of the most decorated quarterbacks to play in New Jersey.

8th Place: Jalen Berger, Don Bosco Prep running back: Berger led one of New Jersey’s most talented backfields at Don Bosco Prep by displaying elite patience  and explosiveness. Only a junior, he holds offers from top-tier Power 5 college football programs and has plenty more in the tank for his senior year.

9th Place: Juwon Jackson, Piscataway running back: Jackson was a main reason why Piscataway reached a 13-0 record and won both a sectional title and a newly-minted “Bowl Game” at MetLife Stadium. He rushed for 1,898 yards and 31 touchdowns on the season.

10th Place: Ronnie Hickman, DePaul Catholic wide receiver/defensive back: Hickman was arguably the most dangerous two-way player in New Jersey. Committed to Ohio State, Hickman was one of five New Jersey football players selected to the 2019 All-American Bowl. His senior season was unfortunately cut short due to a torn ACL late in the year.

Thanks to everyone who voted in our weekly polls for the JSZ Top Play Belt and for our year-end Football Plays of the Year.  Every one of these players was honored at the JSZ banquet in addition to the All-Zone team. Watch all their great plays NOW!