Round three goes to the Lions

Middletown North beats Middletown South in the iPlay America Hockey Game of the Week 4-2 just seven days after losing to the Eagles in the Mayor’s Cup.  We’ve got highlights and post-game reaction along with other quarterfinal results on the ice

Bobby Hampton and Kevin Felice scored two goals apiece and the Lions advance to the Shore Conference Tournament semifinals with a win over their rival.  Just seven days earlier, the Eagles won the Mayor’s Cup with a 4-3 win at Middletown Ice World.  With the season series split, the post-season game would determine much more than bragging rights.  SSZ has all the highlights and extended post-game reaction: 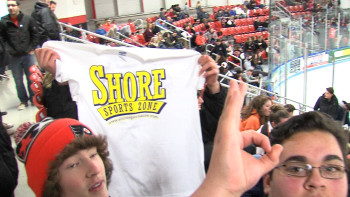 Thanks to iPlay America in Freehold for sponsoring our Game of the Week – coming up on Saturday, we’ve got more T-shirts to hand out – this time at the Marlboro at Holmdel girls matchup!