Shore Sports Zone is dedicated to providing as many high definition highlights and feature of high school sports along the Jersey Shore.  When it comes to youth sports, I always like to tell parents that we’ll be ready to cover their kids when they get to the high school level.  I received an email from a proud parent about a pair of middle school standouts who represented New Jersey in a national All-Star game.  While SSZ won’t have our cameras in the middle school ranks of football, these two young men deserve a shout out for their accomplishment.

Connor Milne and Mark Whittford of Sayreville played for Morgan-Parlin in the Jersey Shore AYF.  The two middle schoolers played at the Bret Cooper Academic All-American game in Dallas on January 4th.  The duo were chosen from a pool of 7,000 hopefuls in which academics (a 3.0 GPA), character and athletic ability are all factors into the selection.

“It was a privilege to be invited to Texas as an All-American,” Milne said.  “I feel that it’s just not a football game because we have to have good grades, too.  My hard work in school and in sports has paid off and gave me a once-in-a-lifetime opportunity.  I learned about other playing styles, received valuable coaching advice, and enjoyed the chance to prove myself at such a high level with the nation’s best players.  Winning the game was the final bonus of the trip.”

“My experience in Texas was great because I was able to play with players from around the country,” Whittford said.  “I enjoyed the team meetings and that we started each day eating breakfast with our teammates.  The highlight of the game was that each position on offense scored a touchdown including myself. I was impressed with the drone video camera flying above -it felt like being a pro.”
Mark and Connor played on the victorious team in a 47-12 triumph.  In addition to playing for Morgan-Parlin, both players have played in youth football in Manalapan.  Both of these young men are on a great path towards playing varsity football and don’t be surprised a few years from now if we revisit this article when they are doing great things in high school. 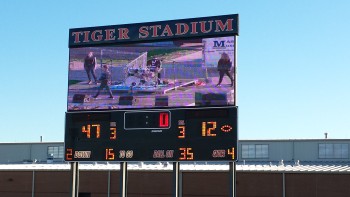 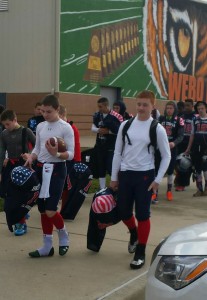