LITTLE SILVER – James Young’s original vision was for Shore Conference teams to get six to eight games of competitive basketball at the end of the summer.  The Maroon and White team camp has grown to an NCAA approved event, attracting college coaches as well as girls basketball powers across the state.  Shabazz out of Newark, the 2014 Tournament of Champions winner, is in Little Silver along with Wildwood Catholic.

“We’ve gotten a good response.  We had over 30 schools here today, 20 of them Division I,” Red Bank Regional girls basketball coach James Young said.  “It’s good for the college coaches.  It allows the college coaches to see kids in a different setting, rather than just their AAU team.”

College coaches from Villanova, Quinnipiac and Iona were just a few of the schools on hand for the final round of Day One games.  Saint John Vianney closed out the first day with a convincing win over Shabazz, while Manasquan topped Wildwood Catholic and Rumson-Fair Haven beat Freehold Township. 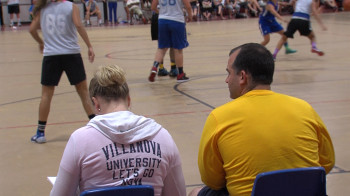 Rumson-Fair Haven’s Grace Stant doesn’t need to worry about catching the attention of a college coach.  She’s already given her verbal commitment to the Villanova Wildcats.  “They have an amazing basketball program.  I really feel comfortable with the coaches, they’ve been there for a while,” Stant said.  “All around it was just a really good fit for me and the basketball team was really welcoming and really nice.”

Manasquan is playing without its top player, Notre Dame commitment Marina Mabrey who is playing with the USA national team in Colorado.  Head coach Lisa Kukoda is happy to see her team get together after the grind of the AAU summer to play against top flight competition.  “This is now our third year of being in this.  It’s top level competition,” Kukoda said.  “They brought in Wildwood Catholic and Shabazz who are two great state competitors so it really gives us an opportunity to see all of the hard work we’ve done throughout the summer and see it in action.” 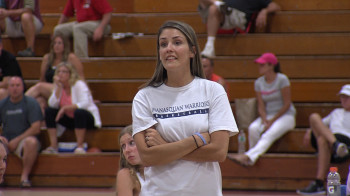 Team participating in the Maroon and White Camp