SEA BRIGHT – Rickie Fowler is set to begin the FedEx Cup Playoffs on Thursday when he tees off in the Barclays in Paramus.  The world’s 13th ranked golfer hosted a free clinic on the Sea Bright public beach for First Tee golf students from across the state.  One of Fowler’s main sponsors, Farmers Insurance, had the golfer start his day visiting one of the rebuild projects ongoing as the area continues to recover from Hurricane Sandy.  He then brought his trademark Puma hats and autographed pictures to hundreds of youngsters and golf fans on the beach.  Fowler took questions from kids and proceeded to hit biodegradable golf balls into the Atlantic Ocean and towards some pins placed on the beach. 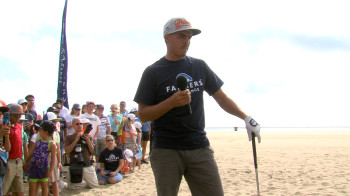 Farmers Insurance has committed 200 volunteers to help rebuild Sea Bright and other communities on the Jersey Shore.  Fowler has been sponsored by the company for the last two years.  The former Oklahoma State golfer made a $100,000 donation after a tornado devastated Moore, Oklahoma. 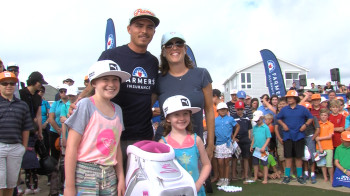 Fowler had a breakthrough effort in 2014 with top 5 finishes in all four major championships.   Fowler is 15th in FedEx Cup points and will tee off at 8:04 a.m. with Martin Kaymer and Adam Scott in the first round of the Barclays.  He’s already secured a spot on the 2014 United States Ryder Cup team, his second time representing his home nation in the prestigious international competition. 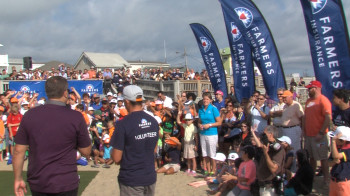 Rickie Fowler talks to the crowd at his golf clinic on the public beach in Sea Bright, New Jersey