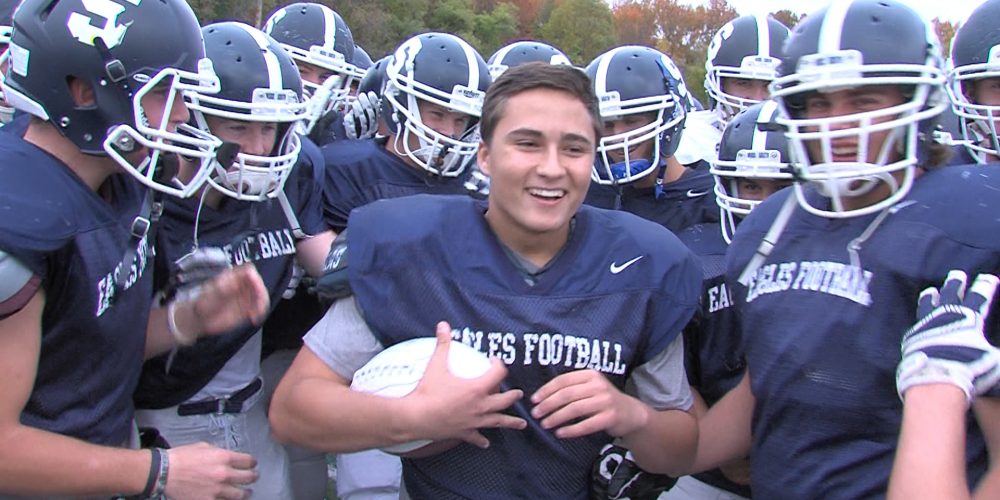 MIDDLETOWN – Middletown South quarterback and kicker Matt Mosquera was presented with a Monmouth Building Center Game Ball for his performance in the Eagles come from behind 24-21 win over Brick Memorial in Week Seven.  Mosquera not only engineered the offense in the comeback, he booted the game winning field goal with just under 2 seconds left.  Mosquera is now 6-6 in field goals, the most in the Shore Conference.

Mosquera received 10,943 votes in under 72 hours edging out RBC’s Doug Zockoll.  The Eagles have this week off and get ready for a big showdown with current unbeaten Freehold Boro on November 7th at home.

Monmouth Building Center in Shrewsbury is our Game Ball sponsor.  Thanks to their support, we’re able to bring special recognition to athletes all across Monmouth and Ocean County every week.  Every Sunday on Shore Sports Zone, we post the nominees for Top Play and Top Performer and the fans vote on who will get the Game Ball.   Each week, we get an outstanding list of Top Plays captured by our cameras.  In case you missed it, here’s the best of Week Seven: