LAKEWOOD – Life on the road can be a grind in minor league baseball.  With players and coaches leaving for spring training in February, it’s nearly eight months of nothing but baseball.  A pair of Middletown natives are making the most of a rare three game road trip in New Jersey.

Darren Fenster is the manager of the Greenville Drive, the Boston Red Sox minor league affiliate.  Fenster and outfielder Kevin Mager are Middletown natives who saw family and friends flood First Energy Park to watch them over a three game series against the Lakewood BlueClaws.

“The majority of guys who are playing pro ball don’t get the opportunity to get home during the year, ” Fenster said.  “To have a quick three day trip here, I mean it’s great to be able to spend some time with friends and family who I haven’t seen in over five months and for me to be able to share this with them and let them enjoy what I’ve been enjoying for a long time, it’s always special coming home.” 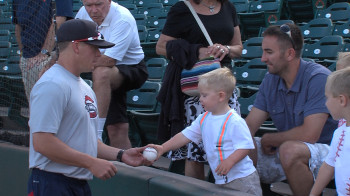 Fenster has been inducted into the Middletown South athletic Hall of Fame, while Mager starred at crosstown rival Middletown North.  The Drive manager joked that he hasn’t talked to Mager this season, acknowledging the Eagles/Lions rivalry that saw him play shortstop at the same time Kevin’s older brother was the shortstop at Middletown North.

Fenster was a 12th round pick of the Kansas City Royals and worked his way to Double-A ball before his career ended with a torn ACL.  He returned to Rutgers, where he was an All-American, as a coach before beginning his pro baseball managing career in 2013.  Mager did not get drafted after wrapping up his college baseball career at Rollins, but signed with the Red Sox organization in 2012.  He climbed his way to the high “A” level and the Salem Red Sox, but was sent down to low “A” Greenville earlier this season, where he’s currently hitting .235 with 5 homers and 23 RBI. 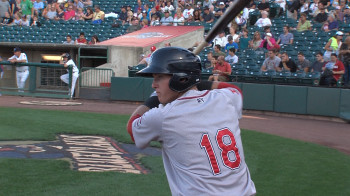 Mager thrilled his family and friends when he launched a homer in the opening game in Lakewood.  He was especially excited to go deep in front of his young nephews who never saw Uncle Kevin hit a home run in person.  “Last night I slept in my own bed,”Mager told Shore Sports Zone.   “It’s definitely a point in my career and look back on and remember for the rest of my life.”