MIDDLETOWN – Mater Dei Prep’s 12 person cheerleading squad captured the NCA High School Open National Championship in the Novice High School Division at a competition in Saint Charles, Missouri.  In addition, the Seraphs were awarded “best use of stunts” in the overall competition that featured teams all across the country.  The team was honored at halftime of Mater Dei Prep’s boys basketball game against Point Pleasant Beach.  Members of the Seraphs varsity football team came out to mid-court and presented the cheerleaders with their national championship banner and trophy.

The moment of being named a national champion is a lifelong memory for the athletes and the coaches.  “We were all holding hands and when they called the other team for second place and we knew that we did it, we cried our eyes out,” senior cheerleader Lauren Matuszewski said. 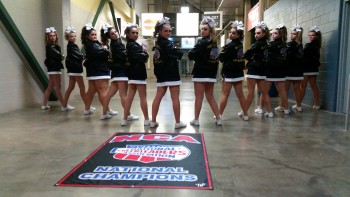 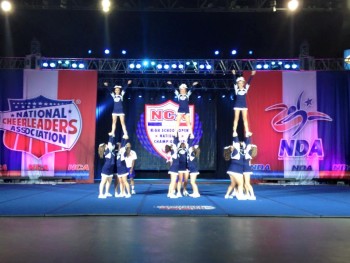