The iPlay America Game of the Week brought us the Bobby Hampton show at Middletown Ice World.  See the highlights of Middletown North’s 12-3 win over Rumson-Fair Haven and post game reaction from Hampton

MIDDLETOWN – Bobby Hampton scored six goals and reached 100 points in his career as Middletown North scored a convincing 12-3 win over Rumson-Fair Haven at Middletown Ice World.  The Lions scored two goals in the opening minute of the game starting with Hampton scoring on a rebound and Christian Acosta with a great individual goal along the right wing.  The Lions would jump out to a 5-0 advantage with Hampton’s third goal highlighted by a tremendous behind the back pass from Tom Terranova.  Hampton’s 5th goal in the final minute of the second period gave him 100 points for his career.  He added one more tally in the third period.  Hampton spent the first two years of his career at CBA before transferring to Middletown North.  Acosta finished with two goals along with John Dinnocenzo.  RFH got goals from Conor Deverin, Brendan Ban and John Monteferrante. 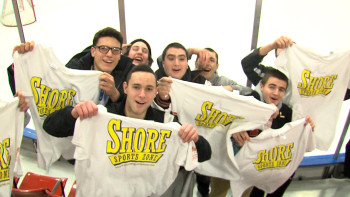 Special thanks to the fans at Middletown North and Rumson-Fair Haven who cast their votes to bring SSZ’s camera to a second straight high school hockey matchup for the iPlayAmerica Game of the Week.  Every Tuesday on SSZ, we will post games on Friday/Saturday in boys basketball, girls basketball and hockey.  The winning game will get extended highlights and post-game reaction as well as Shore Sports Z

one T-Shirts tossed out to fans from both sides.

Special thanks to iPlayAmerica in Freehold for partnering with Shore Sports Zone and bring a new level of excitement to high school sports.