Point Pleasant Boro’s Owen Herrington was on our All-Zone squad, but his brother stole the show at iPlay America.  A number of area hockey players volunteer their time to the Brick Stars, a special needs program that has grown to over 60 participants.  When we saw Ryan Herrington shine in the Brick Stars game against the US Wounded Warriors, we decided to start the tradition of honoring a Brick Stars athlete every year at our banquet.  Ryan received a standing ovation and gave a wonderful acceptance speech in front of the capacity crowd at iPlay America. 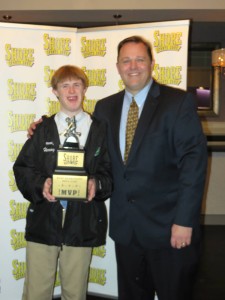 Iplay America Plays of the Year

Thank you to all the great fans for voting over 230,000 times in our iPlay America winter plays of the year!  It was a Saint John Vianney sweep with Jimmy Ellis and Matt Kidney scoring wins from the fan vote: