The Hornets pour in three second half goals to punch a ticket to the Shore Conference Tournament finals at Ocean Township High School.  Holmdel took a 1-0 lead on a header from junior Jack Russo in the 7th minute.  Holmdel would add goals from Justin McStay, Matthew Leon and Eric Hinds in the second half.  JSZ’s Bryan DeNovellis has the highlights of Holmdel’s SCT semifinal win:

Job Cajas scored on a 40-yard free kick with 4:10 to go for his second goal of the game giving the Spartans a matchup with Holmdel on Thursday in the Shore Conference Boys Soccer Finals. Trailing 2-1 at the half, the Spartans got the equalizer from Stephen Carton.  Ocean has now won 13 consecutive games. 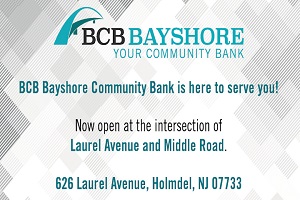 Thanks to BCB Bayshore – Your Community Bank for sponsoring our Holmdel Hornets coverage.  It’s because of BCB that we’ll have full coverage of the Holmdel-Ocean championship game on Thursday.