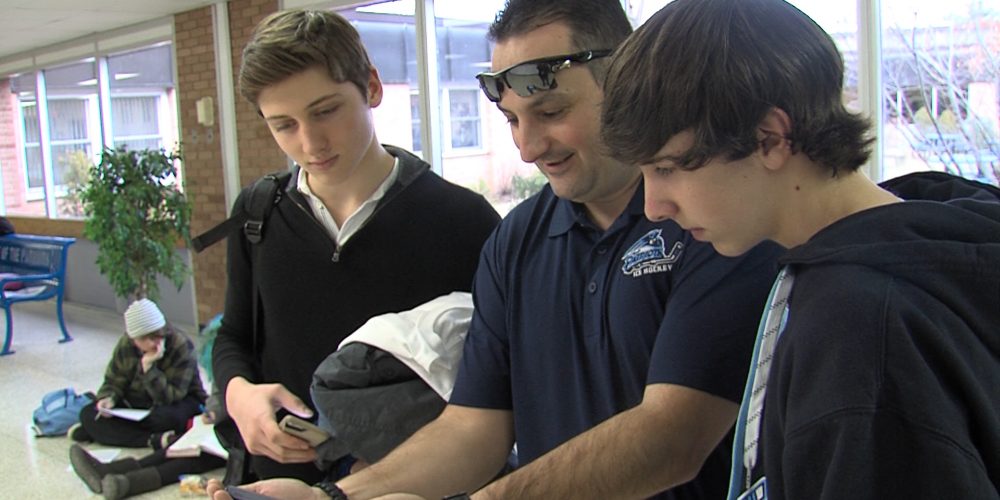 SSZ talks with Freehold Township’s Julian Kislin and Max Halvorsen after their goal against Middletown North went viral across the world, highlighted by Top Play honors on ESPN SportsCenter

FREEHOLD – There was an estimated crowd of about 150 at Middletown Ice World when Freehold Township came back from a 5-2 deficit to earn a 5-5 tie against Middletown North on January 13th.  No one at the time knew that the Patriots second goal of the night would be seen by hundreds of thousands of people across the world.

“Right after the play, I didn’t think it was that nice and then I saw it on your YouTube page and it kind of went viral and people hashtagged SCTop10,” Kislin said.  “When I woke up in the morning, there was different accounts on Twitter that kept posting it.”

Julian Kislin deked out nearly everyone on the ice wearing a Middletown North jersey to deliver a pass between the defenders legs that set up a Max Halvorsen backhand for a goal.  Shore Sports Zone posted the highlights of the game shortly before midnight on the 13th.  Then, an individual clip was posted shortly after of the goal.  On the morning of January 14th, the video was sent to ESPN for consideration for their Top 10 Plays on SportsCenter.

“My phone wouldn’t stop blowing up,”  Halvorsen said.  “I was getting people from Florida recognizing the goal and saying nice goal.  It’s crazy.”

Throughout the day, social media began buzzing about the goal and websites across the country began to share the highlight.  ESPN wasted little time in getting the goal on the air, showing it as a highlight on the afternoon edition of SportsCenter.  SSZ has two different clips of the highlight on our YouTube Channel.  The combined traffic from those two videos topped 250,000 in just over 24 hours.  Besides coverage from such website giants as USA Today, Yahoo, Reddit, Sports Illustrated and Bleacher Report, the story has been picked up in Sweden, Finland, Ireland, Spain and dozens of Canadian websites and media outlets.

The day wrapped up with ESPN SportsCenter naming it the #1 Play of the Night as the clip ran throughout the evening and morning editions of SportsCenter.  ESPN hockey analyst Barry Melrose provided detail commentary of the goal during the 11:00 pm SportsCenter.  Kislin, who also plays for the Comcast club team, heard from teammates that a number of NHL players watched the video and were singing his praises.

“For the school and the town it’s an amazing thing,” Freehold Township hockey coach Mike Celano said.  “I couldn’t be happier that these two guys were able to do what they did.  I live in the town, I coach in the town so just to bring any notoriety to the program, the team and for these guys and their futures – it’s amazing.”

Kislin and Halverson hit the ice for the first time since the viral video on Friday night at 6:20 pm when Freehold Township takes on the Howell Rebels at Jersey Shore Sports Arena.  The game was voted on by local fans as the iPlayAmerica Game of the Week.   SSZ will have extended highlights and post-game reaction and throw out T-Shirts to the student sections of both Howell and Freehold Township.