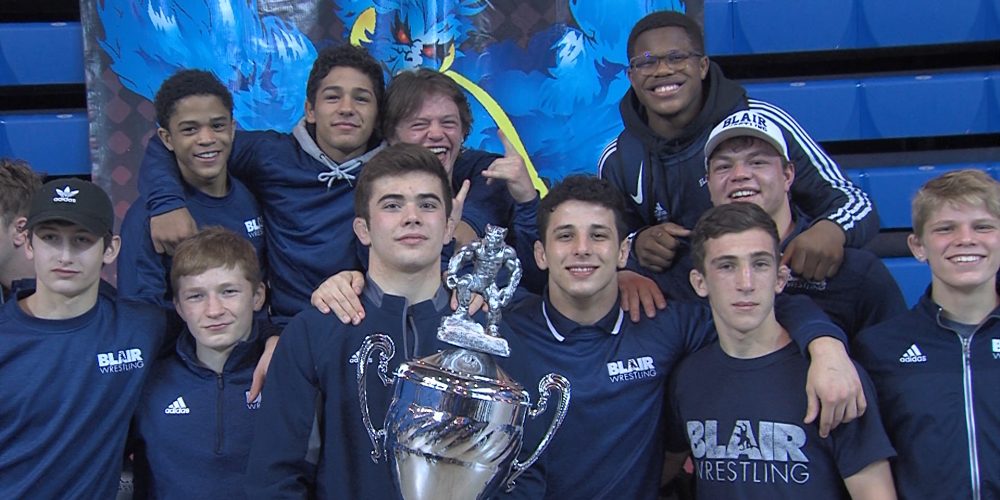 The University of Delaware hosted wrestling teams from Ohio and Connecticut all the way down to Florida in what is considered one of the best scholastic in-season tournaments in high school wrestling. New Jersey wrestlers showed that the state continues to be regarded as one of the best in the nation. Blair Academy won the team competition for a 20th straight year with Bergen Catholic finishing in fourth. In the individual finals, there were eight bouts involving NJ wrestlers with four coming home with the prestigious Beast of the East title. JSZ will post highlights and post-match reactions from the championship bouts throughout the evening

Tyler Vazquez upset the #1 106-pound wrestler in the nation in the semifinals to reach the championship bout and took Brandon Cannon into overtime before falling short:

St. John Vianney’s first-ever state champion at 113 pounds last year is off to a great start at 120 and unveils a creative move in his arsenal. See “The Peterson” and a dominating effort to win the Beast of the East title:

Hanover Park’s Joey Olivieri held a 1-0 lead until the final seconds before Brecksville, Ohio’s Jimmy Carmany scored a two-point takedown with under five seconds remaining in the match.

Trailing 5-2 at the end of two periods and 8-5 late, Blair Academy’s Cody Chittum used a cradle lock for two points and earned three more back points on the turn to score a 10-8 win over the Harvard wrestling commit to win the 138-pound championship. Chittum’s late heroics earned him Most Outstanding Wrestler and helped Blair Academy claim the overall team title. Watch the big move and post-match interview now:

DePaul Catholic’s Connor O’Neill lost to Blair’s Domonic Mata last year in the 160 pound Beast of the East championship match. One year later at 170, O’Neill scored four early points which proved to be the difference in a 4-2 decision. The Rutgers commit starts his senior season off with one of his major goals accomplished:

The Rutgers commit showed his top seed was justified in a matchup of two top-10 nationally ranked wrestlers. Posnanski raced out to a 4-0 lead and never looked back to win the Beast of the East title: