The Zoneman presentation was the finale of the first SSZ All-Zone banquet.  The top players from the Shore Conference were honored along with state championship Game Ball winners from Monmouth Building Center and the IPlay America Plays of the Year winners voted on by fans.

Meet SSZ’s Scholar-Athlete of the Year

Rumson-Fair Haven’s Tucker Briggs was an all-division selection who had 102 tackles in his senior season after 80 in his junior campaign.  He finished his career with 212 tackles and back to back state championships.  Even more impressive is his GPA and SAT score (4.7 and 2380!)  Tucker accepted the award for Scholar-Athlete of the Year at the banquet:

Monmouth Building Center in Shrewsbury presented a state championship edition of Game Balls.  All six state champ winners were honored at the banquet: 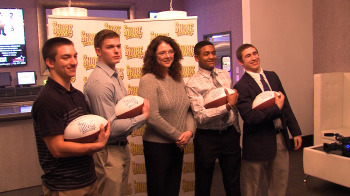 IPlay America Plays of the Year

Thousands of fans had their voice heard on shoresportszone.com and earned their favorite players a trip to the banquet.  Here are the Play of the Year winners voted by YOU!