The Cougars end the four year reign of Northern Highlands with a 1-0 win in the Group 3 state championship over the USA Today top ranked high school girls soccer program.  SSZ has highlights and post-game reaction from Kean University from all four state championship games

Frankie Tagliaferri’s penalty kick with 25:56 to go in the second half was the only goal of the game as the Cougars upset the four time defending state champs and current #1 team in the USA Today national girls soccer poll.  The Cougars played without senior Bridget King, their second leading scorer and Division I signee with Vermont.  Lauren Feaster, in her first season as a goalkeeper, was stellar along with the Colts Neck back line.  Watch the highlights and post-match reaction here:

Freshman Hannah Birdsall’s corner kick 2:13 into the second overtime bounced off two Glen Ridge defenders and into the net to give the Blue Devils a golden goal and its first ever outright group championship.  Frankie McDonough gave Shore a 1-0 lead at the half, but Glen Ridge drew even in the 50th minute on a header goal by Galen Lew.  Watch the highlights and post-match reaction here:

Ramapo got two first half goals on headers off corner kicks by Carlie Brogan and Olivia Kraebel to avenge a loss to the Hornets in last year’s state championship.  Holmdel finishes the year with a 16-7-1 record:

The Patriots and Ridge played 100 minutes of scoreless soccer.  NJSIAA does not decide state championships on penalty kicks.  As a result Freehold Township and Ridge share the Group 4 state crown.  Here’s post-match reaction: 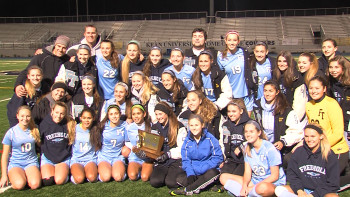