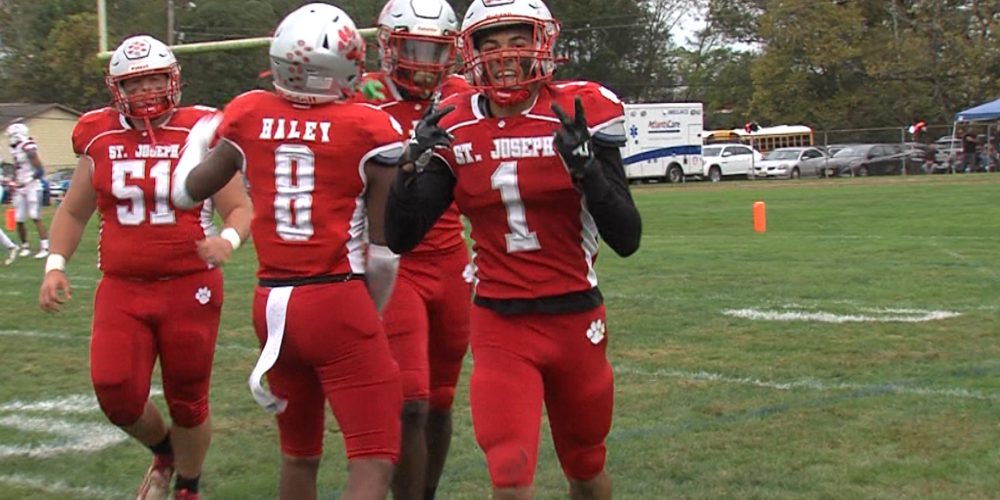 It’s already Week 8? You bet! Thanks to our sponsors, we can provide three free games to close out our Week 8 coverage. We head over to West Orange for the OceanFirst Bank Game of the Week, while also making visits to Montvale and Hammonton for a pair of great games. Enjoy all the highlights!

The Crusaders prevailed over the Pirates in a Super Football Conference game with major implications. Ryan Butler handled 29 carries for 236 yards and three touchdown runs help Bergen Catholic (8-0) keep their perfect record intact. Notre Dame QB commit Steve Angeli missed a few series’ with an injury but returned and threw for 221 yards and two touchdowns. Seton Hall Prep (6-2) went toe-to-toe with BC, thanks to Jaden Craig’s three touchdown runs and one touchdown pass. The Crusaders keep the No. 1 ranking in New Jersey and continue to pad their resume for the No. 1 seed in the Non-Public A state tournament.

JSZ’s Jay Cook has the highlights and reaction from the OceanFirst Bank Game of the Week:

Jersey Sports Zone’s coverage of Seton Hall Prep is brought to you by One on One with Steve Adubato.

Brendan Stapleton’s 16-yard TD run in the 4th quarter broke a 14-14 tie and the Green Knights had three turnovers on defense to score a big home win over the Ironmen. Pete Schuh had a 106-yard fumble return for a score that gave St. Joe’s a 14-0 lead. Don Bosco had a pair of TD passes from Nick Minicucci in the loss. JSZ’s Rich Chrampanis has the highlight from a fantastic Saturday in the Super Football Conference

Jersey Sports Zone’s coverage of St. Joe-Montvale is brought to you by Rothman Orthopaedics

Playing their first “home” game in two seasons, the Wildcats earned the WJFL Continental Division title and their fifth win in a row with a victory over the Minutemen. Ja’son Prevard threw four touchdown passes in the win for St. Joe (7-2), including two to Jahmeer Cartagena. It was also career victory number 350 for Wildcats head coach Paul Sacco. Jo’Nathan Silver had an electrifying TD run for Township (6-2) in the loss.

JSZ’s Mike Frankel has the highlights and reaction from Capella Field at Hammonton Middle School: