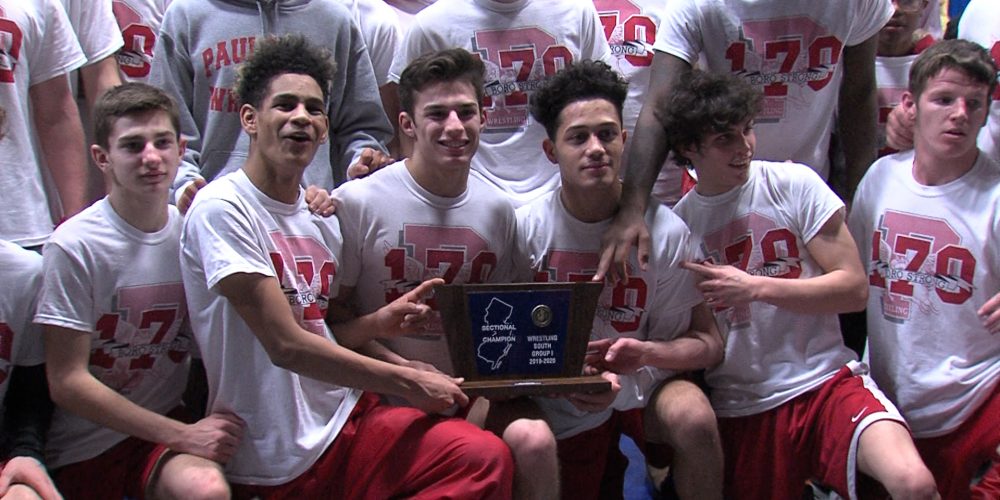 The hardware isn’t just handed out; it’s earned. JSZ has coverage of team playoff wrestling sectional finals from all over the state.

Delbarton’s dominant run throughout the state playoffs continued Friday night as the Green Wave won their first sectional title since the 2011 season. Delbarton — the consensus No. 1 ranked team in New Jersey — has outscored its competition 164-17 through three playoff matches. They’ll face St. Augustine in the Non-Public A final Sunday in Toms River.

JSZ’s Jay Cook has the highlights from Morristown:

Ethan Colello scored a tech fall at 106 pounds and Dylan Kolakowski clinched the championship with a pin at 113 to give the Warriors a third straight sectional title. Westfield jumped out to a 12-0 lead early but the Warriors got pins from Jack Murray and Gerard Aroneo to take the lead back. Leading 26-21 with three bouts to go, Colello and Kolakowski closed out the victory. JSZ’s Rich Chrampanis has the highlights:

The Red Raiders did it for Brandon. Defending 170-pound state champion and Virginia Tech commit Brandon Green has been in the hospital for almost two weeks, and Paulsboro has been rallying to push on through the playoffs. The Red Raiders took down the Wolverines to win their 12th consecutive sectional championship.

JSZ’s Mike Frankel the highlights and reaction from an emotional night in Woodstown:

The Eagles win back-to-back sectional titles for the first time in program history in a back-and-forth battle against the Bulldogs. West Deptford led early but lost four consecutive bouts and trailed halfway through the match. Cody Thurston (195), Tion Cherry (285), and Justin Monzo-Hull (120) picked up huge pins down the stretch to clinch the title for the Eagles.

The clash of two Shore Conference and New Jersey powerhouses was a blow for blow battle! A 7-7 split in the 14 bouts came down to the last match and freshman Cole Velardi delivered for the Rams. With a pin in the final bout, Velardi secured the win for Southern, they won their third sectional championship in a row and fourteenth all time. Conor Collins, Eddie Hummel, Cole Velardi, Robert Woodcock and JT Cornelius won by fall for the Rams. Paul Jakub won by fall while Nick Cerulli and Shane Rietsma won by tech fall in the loss.

JSZ’s Kenneth Bradley has the highlights from Farmingdale: