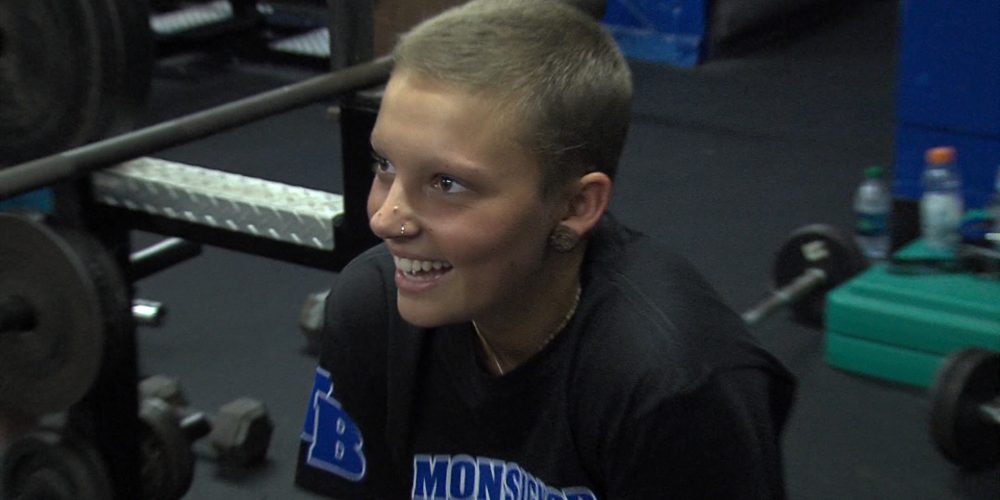 TOMS RIVER – Her name is still written in chalk on the record board in the Monsignor Donovan weight room.  Victoria Breuer graduated from the Toms River high school in 2011 and at 123 pounds, she holds the Griffins powerlifting record with 240 pounds in the squat, 130 pounds bench press and 260 in the deadlift.  Those numbers pale in comparison to her most impressive victory which didn’t come in competition.

Breuer was diagnosed with Hodgkin’s lymphoma last summer and underwent chemotherapy from December 18th to May 28th.  With her cancer in remission, Breuer has returned to the Monsignor Donovan gym to resume powerlifting.  Even though she graduated from high school three years ago, she has maintained a strong bond with her coach, Mark Deppen.  The Griffins powerlifting team wore her “VB” initials on their left sleeve and helped encourage her through her battle against cancer.

Breuer called her diagnosis a wake up call and made her realize that she wants to get back to the gym and make it a part of her life after drifting away from weights following her high school graduation.  She admits that she took a powerlifter mentality during her fight again cancer.  “I’m tough, I’ll beat you up,”  Breuer said in her feature on SSZ. “That’s how I literally thought of the cancer.  I’m going to be the crap out of you.”

Click HERE to see a feature on Monsignor Donovan powerlifting