Torney explodes for 37 in OT thriller

The iPlay America Hoops Game of the Week saw Manchester come back from 15 points down in the second half to earn a 73-61 overtime win over Central Regional.  Jordan Torney had a sensational performance with 37 points.  We’ve got extended highlights and post-game reaction from both sides

Jordan Torney had 37 points and Manchester went on a 12-0 run in overtime to post a 73-61 come from behind win over Central Regional.  The Golden Eagles had a 15 point lead in the third quarter and a 10 point lead early in the fourth before the Hawks made a furious comeback.  Torney scored in bunches, starting with seven straight points to end the first half to cut a lead from 16 to 9 (39-30 at the half).  Central’s Evan Lang scored 14 in the first half including a pair of long three pointers then secured his 100th career point from the charity stripe in the third.  Lang finished with 20. 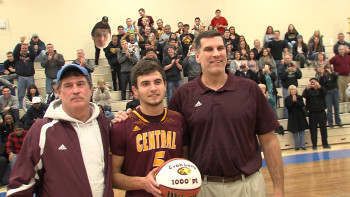 Shavar Reynolds had a hot streak of his own in the final 90 seconds.  He put the Hawks ahead for the first time with a late three pointer to make it 60-59.  Free throws tied the game at 61 and Central held the ball for the final shot, but Manchester played terrific defense forcing an extra four minutes.  In OT, the Hawks saw Reynolds and Torney do the heavy lifting with Jordan slamming one down to electrify the home crowd.

Shore Sports Zone is only six months old.  We are working around the clock to secure sponsors and spotlight student-athletes all across the Jersey Shore.  When the polls closed on Thursday, SSZ was in a meeting and couldn’t get to a computer until 30 minutes after the deadline.  With Middletown North/Middletown South hockey and the Central/Manchester game neck and neck, we decided to have two Games of the Week.  That meant T-Shirts at Middletown Ice World and to Manchester High.  A special thanks to iPlay America for allowing us to interact with our great fans in a unique and special way.