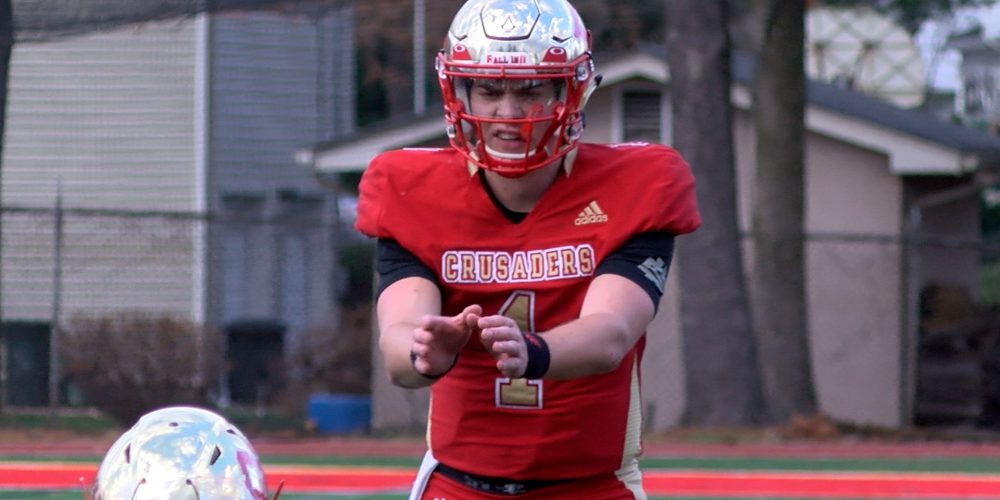 The world of college football recruiting couldn’t be any more hectic than it is right now in 2021, but that doesn’t preclude the country’s top prospects from finding their future homes.

That’s exactly what happened Thursday night when Bergen Catholic quarterback Steve Angeli took to social media and made waves on the national recruitment front by announcing his verbal commitment to the University of Notre Dame.

Angeli, a four-star rated quarterback prospect, is the first major recruit in New Jersey’s talented crop of 2022 passers to make a verbal commitment. In his first full season as a varsity starter, Angeli completed 59 percent of his passes for 945 yards and threw six touchdowns to only two interceptions. He was selected to JSZ’s All-Zone team after his breakout season.

Angeli’s work came in the Super Football Conference’s United Red Division – widely hailed as one of the toughest high school football divisions in the entire country. There were no championships awarded in 2020, but Bergen Catholic finished the year at 5-1 and was recognized among the top teams statewide when the season closed.

Standing at 6-3 and 215 pounds, Angeli has been described as a prototypical quarterback – in both stature and ability – by Bergen Catholic head coach Vito Campanile, a former quarterback.

Angeli’s decision to head to South Bend is the latest reminder that Notre Dame still has an incredible foothold when recruiting elite New Jersey talent. In December, the Fighting Irish swooped in at the last minute and signed St. Joe’s (Mont.) RB and JSZ Zoneman Player of the Year Audric Estime.

Angeli’s best football is ahead of him as New Jersey is set to welcome back a full season and state championships for 2021-2022 season. The Westfield, NJ native will be among the state’s best players suiting up next fall.

Visit JerseySportsZone.com for all the latest news and highlights on New Jersey athletes.