Three players are on the podium for SSZ’s Zoneman Trophy, presented to the outstanding high school football player in the Shore Conference

Shore Sports Zone celebrates the 2014 high school football season with the first annual SSZ All-Zone banquet at IPlay America on Tuesday, December 16th.  The Shore Conference head coaches cast their vote for the top player in the Shore Conference for SSZ’s version of the Heisman, the Zoneman Trophy.

Who’s coming to the banquet?

Invites have gone out to every head coach informing them about the players who have made the 2014 SSZ All-Zone team.  Players and head coaches are invited to the banquet courtesy of Shore Sports Zone and our sponsors.  Any parent, family member, booster or assistant coach/administrator can attend the banquet by purchasing a ticket.

Click HERE for information on attending the SSZ Football Banquet – anyone having problems ordering tickets can email rich@shoresportszone.com for assistance.

The banquet will feature dinner followed by our program which will be posted on shoresportszone.com on Wednesday:

* Highlights from every selecftion on the 2014 SSZ All-Zone team (offense, defense, special teams)

What is the Zoneman Trophy?

Shore Sports Zone founder Rich Chrampanis created this award in Myrtle Beach, South Carolina in 2000 as a centerpiece to his high school football coverage in local television.  For 15 years, Rich selected an All-Zone team in South Carolina and asked each head coach to vote for the best player in the area with each coach casting a 1st, 2nd and 3rd place vote.  The All-Zone team down South produced over 20 NFL players and the Zoneman Trophy produced two notable winners: current Notre Dame starting quarterback Everett Golson and Pittsburgh Steelers starting middle linebacker Lawrence Timmons who talked about the Zoneman Trophy prior to winning Super Bowl 43. 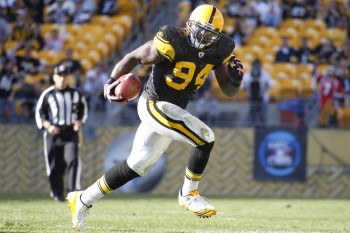 “I’m still proud to this day to win that award.  I remember receiving it with my parents.  It was definitely one of the greatest days of my life” – Lawrence Timmons on winning the Zoneman Trophy

Led the Shore Conference in passing yards with 2,198 to go along with 25 TD passes and just four interceptions 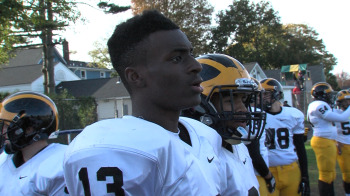 Set the all-time single season Shore Conference rushing mark with 2,589 yards with 27 touchdowns on the ground 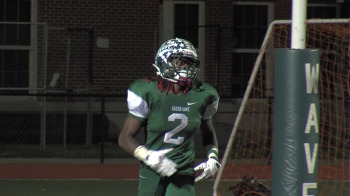 4th place (tie): Imamu Mayfield – Manalapan
Imamu Mayfield led the Shore Conference in rushing touchdowns with 31 trips to the Zone.   The son of a former IBF Cruiserweight boxing champ bearing the same name, young Imamu made a name for himself on the gridiron knocking out defenses with the deadly combination of speed and power. His 134 all-purpose yards at Rutgers was a big reason that Manalapan captured its first ever sectional championship.

Josh Dixon was the catalyst of one of the most improved teams in the Shore Conference. The Freehold Boro senior running back saw his team improved from 2 wins to 7. Dixon galloped for 1407 yards and 16 touchdowns averaging over 7 yards a carry. He opened the 2014 season with 219 yards and 4 touchdowns to give the Colonials a 26-14 win at Middletown North and spark a seven game win streak. His head coach Dave Ellis sums up best what Josh Dixon means to Freehold Boro – he’s the difference maker.

Eddie Hahn was the trigger man on Red Bank Catholic’s first state champion since 1976. The junior already has a Division I offer from the ACC’s NC State Wolfpack and many more colleges will follow with scholarships. Hahn threw for 1485 yards and had an impressive TD to INT ratio of 20 to 6. He’s a true athlete playing in the Caseys secondary and showing his dual threat skills running for over 500 yards and 12 rushing scores.

Christian Palmer helped guide the Mater Dei Seraphs to an 8 win season and over 3200 combined yards in the air and on the ground. He finished with 44 touchdowns which broke former Middletown South running back and current Miami Dolphin Knowshon Moreno’s Shore Conference record. Coach Steve Shi-rappa says that Christian’s work ethic is what separates him from others. He worked every day to make himself better and is the type of player coaches are blessed to have.

Tymere Berry is one of the most electrifying football players in the Garden State. The Toms River South quarterback was a threat to break a long run every time he touched the ball. He ran for 1257 yards and averaged nearly 7 yards a carry – on top of his 18 touchdowns rushing, he showed the ability to throw the deep ball with 7 TD passes. Opposing coaches in “A” South are thrilled to see Tymere Berry move on to the next level. Berry continues to see great interest on the recruiting radar recently picking up an offer from Division I Army.

Charlie Volker topped 1400 yards and 18 touchdowns to help Rumson-Fair Haven win its second straight Central Jersey Group 2 Championship. These numbers alone are worthy of post-season honors, but when you factor in that Volker accomplished these stats in limited action and they make them even more incredible. Fighting through a high ankle sprain for most of the season, Volker missed multiple games and was often shut down at halftime. It paid off as Volker ran for 160 yards and a score in a 21-0 state title win against Delaware Valley. Charlie Volker will play college football in the Ivy League for the Princeton Tigers.

Mike Gawlik made plenty of highlights in the backfield for the Jackson Memorial Jaguars – the 1000 yard rusher had one of the biggest plays of the 2014 season with this overtime run to beat Red Bank Catholic and end the Caseys 40 game win streak in Shore Conference play. Gawlik is equally impressive as a defensive back topping 100 tackles and making three interceptions. He is one of just four sophomores who made the 2014 All-Zone team