Pat Mooney’s win at 152 pounds gives Southern Regional a 27-24 triumph over Howell to win the Group 5 State Championship at Pine Belt Arena in Toms River.  SSZ has the highlights and post-match reaction

Pat Mooney’s 4-2 win at 152 pounds broke a 24-24 tie to give the Rams its second state championship on the mat.  Southern raced out to a 15-0 lead, before Howell rolled off three straight wins including a pinfall from Kyle Slendorn at 113 pounds to tie the match at 18.  Mike Racanelli came back from a 1-0 deficit to score a 2 point takedown in the 3rd period to secure a 2-1 win over Peter Dee to give Southern a 24-21 advantage.  Kris Lindemann gave the Rebels a win at 145 pounds setting the stage for a winner take all bout at 152 pounds.  Mooney jumped out to a 4-0 lead on Christian Murphy and hung on to give the Rams the title: 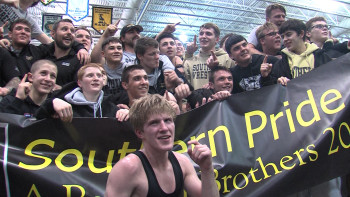 We covered last night’s Southern Regional wrestling state championship thanks to Manasquan’s Bank sponsorship of the Howell Rebels.  We want to show more great moments from Southern Regional in ALL sports.  A great way for a local business to get their name in front of our videos and stories on Shore Sports Zone.  Email rich@shoresportszone.com if you know of a Manahawkin business that can support our Southern Regional coverage.

Thanks again to Mansaquan Bank for supporting our Howell Rebels coverage this year and congratulations to the Howell wrestling team on an outstanding season.