Saint John Vianney quarterback and Boston College commit Anthony Brown was named the quarterback MVP at Nike’s regional showcase in Columbus, Ohio and his on his way to Los Angeles to compete for a spot in Nike’s Elite 11 quarterback school

Saint John Vianney quarterback Anthony Brown doesn’t have to prove anything to college recruiters.  After all, he’s already given a verbal commitment to play at Boston College.  But the SSZ Zoneman Trophy Finalist is shining on the national stage.  Over the weekend, Brown attended Nike’s “The Opening” regional showcase at Ohio State University.  Competing against Division I caliber talent, Brown was named quarterbacks MVP. 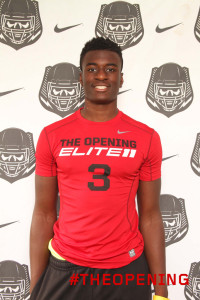 As a result of his outstanding performance in Columbus, Brown is on his way to California this weekend to compete in Nike’s Elite 11 QB semifinals.  30 of the top high school quarterbacks in the nation will go through two days of on-field drills and seven on seven scrimmages to determine who will get an invite to the Elite 11 quarterback school, which features six days of intensive work led by Super Bowl winning signal caller and ESPN analyst Trent Dilfer.  Brown confirmed his invite to the Elite 11 semifinals on his Twitter account:

Elite 11’s pedigree speaks for itself.  10 of the last 11 Heisman Trophy winners have been in the Elite 11 Finals or Regionals as well as 35 of the top 49 rated passers in the NFL in 2014.  Brown was a finalist for SSZ’s Zoneman Trophy in 2014, given to the top high school football player in the Jersey Shore.  Watch our profile of the Lancers quarterback and watch the highlights that have made him among the nation’s best high school quarterbacks: