The National All-Stars scored a 9-6 win against the American All-Stars in the Shore Conference hockey senior showcase.  The game featured a draft of the top seniors in the area selected by area head coaches.  Middletown North’s Bobby Hampton and Khristian Acosta were the first two selections and putting the teammates on opposite teams.  CBA’s Ryan Bogan broke a 6-6 tie in the third period to start three straight goals for the National’s to close out the game.  Here are all the goal scorers from Sunday afternoon: 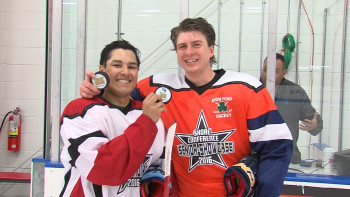 We thank the Shore Conference coaches for allowing us to be involved in this game and providing Game Pucks for the MVP’s.  Avon Pond, who sponsors our Game Puck segment, provided the jerseys for this great event.