Jessica Welch had an outstanding junior season to lead Shore Regional to a Group 1 State Championship.  With 58 goals and 19 assists, Jessica captured a long list of awards starting with Shore Conference player of the year and ending with being named 3rd team All-American by the National Field Hockey Coaches Association, one of just 48 players across the nation to get the honor.

Welch was a clutch performer.  She scored the game tying goal late in the second half and the game winner in overtime to give the Blue Devils a Shore Conference semifinal win over Wall and in the Group 1 State Championship, she got the game winner in a 2-1 win over Collingswood. 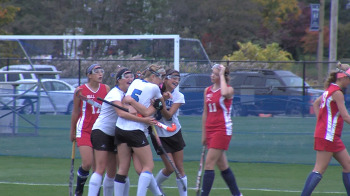 Welch has already given a verbal commitment to play Division I field hockey at Stanford University where she plans to major in biology.  “I love the atmosphere and the academics was a plus for me,” Welch said.   “I want to study human biology.  I’ve always wanted to be a nurse or something in that field.  It has always interested me.”

Each month, Shore Sports Zone will profile an athlete who trains at RYPT.  Reach Your Potential Training has become the home of many of the Shore Conference’s top athletes in numerous sports.  A lot of the athletes you see on the highlights on Shore Sports Zone are putting in the hard work in critical training at RYPT to get ready for their season.   Coming soon, SSZ will take you inside the RYPT facility and show their elite training methods that are getting kids throughout the Shore Conference college scholarships!