Rumson-Fair Haven’s Reid Bedell picked the best possible time to fire his career best round.  Bedell, who will play Division I golf at Lafayette, overcame a bogey on the first hole and went on to post five birdies and an eagle to shoot a -6 under 66 at the NJSIAA/MGA/NJSGA Tournament of Champions at Hopewell Valley Golf and Country Club .  His previous career best round was 68, but what makes this stellar 18 holes even more impressive is the fact that he never shot better than 74 at Hopewell Valley.

“I wanted to be aggressive. I knew I could make birdies on the par fives and I went four under on them today,” Bedell told the NJSGA following his round.. “My putting helped me get a lot of par saves.  Winning the Tournament of Champions was beyond my wildest imagination. It surpassed all my expectations.”

Other than the first hole bogey, the only drama Bedell had to face was a 40 minute lightning delay with just one hole remaining.  He came back from the delay and played his 18th hole, the par-4 374 yard 1st and birdied to complete his record setting round.  The left hander had quite a stellar senior season, leading the Bulldogs to the Group 2 team state championship and picked up four individual titles: the Wall Invitational, the Garden State Cup, the Group 2 sectional crown and the Tournament of Champions. 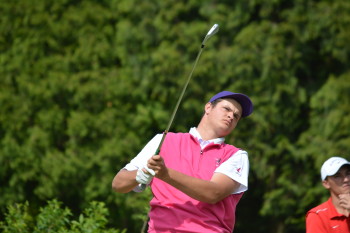 Reid Bedell shoots a 66 in the T of C on Monday. The lefty is set to play Division I golf at Lafayette (photo courtesy NJSGA)