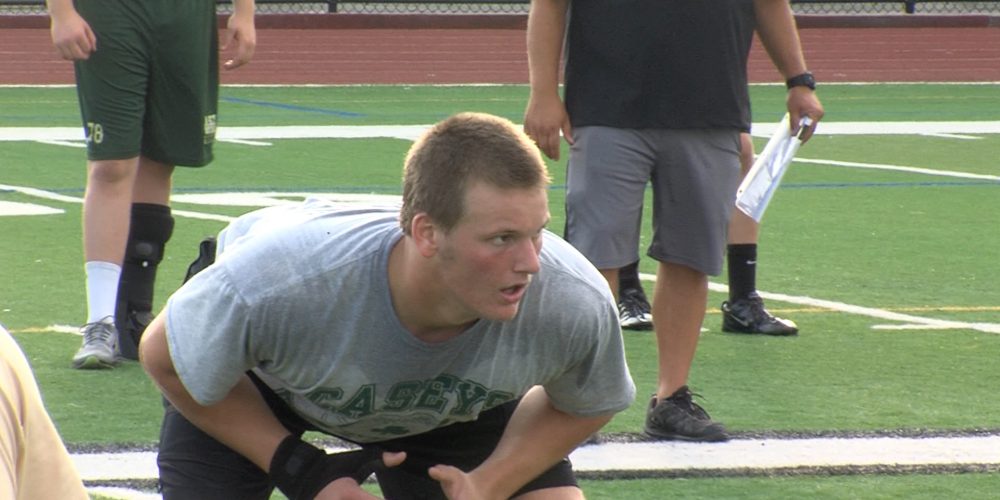 RED BANK – February 4, 2015 is over six months away, but Division I prospect Jamie Gordinier didn’t want to be hounded with text messages, phone calls and questions heading into his senior season at Red Bank Catholic.  Gordinier has given a verbal commitment to play for former RBC assistant coach Al Golden at the University of Miami.  The 6-foot-4, 235 pound senior could project as a defensive end in college.  He had 86 tackles and 4 sacks in the Caseys 10-1 2013 campaign.

Gordinier’s commitment is simply words at this point, since he can not sign his letter of intent until National Signing Day in February, but he calls his pledge to Miami a lock.  “During the recruiting process, it was crazy with coaches calling and reporters,” Gordiner told Shore Sports Zone.  ” Now that I’m committed to Miami, I’m locked in and it’s a lot easier.”

There’s a lot of talk in major college football about an early signing period and the trend among top Shore Conference players this summer has been for top players to make summer commitments.  Caseys teammate Ryan Kroeger, a lineman, will play in the FCS ranks for the Fordham Rams.  Barnegat has a trio of Division I verbals in linebacker Manny Bowen (Penn State), offensive lineman Sam Madden (Wisconsin) and quarterback Cinjun Erskine (Bucknell).

RBC head coach Jim Portela has plenty of experience with college coaches coming to his school to recruit.  Quenton Nelson, an offensive lineman last year, inked with Notre Dame and there are more Caseys beyond Gordinier and Kroeger who have college options.   A pair of juniors, offensive lineman Liam Smith and quarterback Eddie Hahn, have picked up their first major college offers this summer.

“A lot of coaches are concerned that everything is so sped up nowadays,”  Portela said.  “I think some kids slide through the cracks unfortunately this way because the recruiting process starts so early and there’s pressure on the kids to commit early.”   Portela used a hypothetical situation of a school that may have three defensive tackles they intend to sign and how they would tell a recruit that they already have two verbals at that position and if the recruit doesn’t commit now, that spot could get filled.

“We’re fortunate here most of our kids are able to get out and do the unofficial visits and make a good well informed decision and it’s beautiful if you’re in that position where you can decide, get it out of the way and enjoy your senior year.  It doesn’t work for everybody. ”