Mikey Strong lives up to his nickname

WFAN’s Boomer Esiason and Craig Carton have talked to some of the biggest names in the sports world and know how to engage an audience with captivating interviews.  When the duo heard the story of Mike Nichols, a Monroe High School hockey player who was paralyzed in January, 2014, they were compelled to bring him in the studio to talk about his battle.  The popular radio duo were so moved by Mike’s infectious attitude and spirit, they decided to host an All-Star game to raise money for the Nichols family.

“His personality, his whole attitude about not being defeated by this,” Esiason said.  “He walked out of the room and Craig and I were crying because we’re fathers ourselves, so we understand with the Nichols family is going through and we said we had to do something.”

The interview was in November and the radio duo moved quickly to form a charity hockey game.  Middletown Ice World became the host and former NHL players from the tri-state area teams filled the roster.  Former Rangers Ron Greschner and Tom Laidlaw along with former Devils greats John MacLean and Bruce Driver were just some of the names who hit the ice.

The game was a complete sellout and everyone who bought a ticket received two tickets to an April New York Yankees game.  Team Boomer defeated Team Carton 12-11 with Esiason playing center for his team and Carton in between the pipes at goalie. 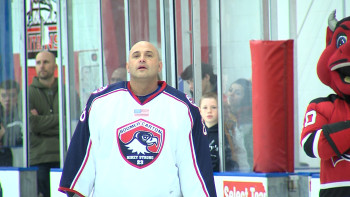 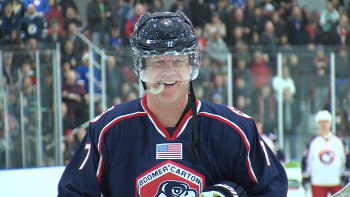 Mikey didn’t want to make it all about him and added the Christopher and Dana Reeve Foundation to also benefit from the game.  Nichols was asked by the Foundation to help spread the word about the Big Idea.  The Reeve Foundation is spearheading epidural stimulation research to try and transform individuals with spinal cord injuries.

Nichols hopes that one day epidural stimulation can get him out of his wheelchair and back on the ice playing the sport he loves.  “It was a little bittersweet being out on the ice in my wheelchair,” Nichols said.  “I got out there, I saw the crowd and I knew they were here for me.  It was an unreal feeling, it was something I never expected. I couldn’t thank people enough for coming out.”

“This is all about Mikey and doing what’s right for him and his family and the Reeve Foundation,” Carton said.  “So the fact that we can use the popularity of our show to help raise our money for two worthy causes, we’ll do it day and night.”

Every Sunday, we ask the Shore Sports Zone nation to cast their vote for top hockey performers from the past week and hand out a SSZ Game Puck.  We’ve got the best of the best from Boomer Esiason and Craig Carton and want to know who you think had the better game? Cast your vote and we’ll send an SSZ Game Puck to the winner.   After all, the top high school hockey players in the Shore love to get our Game Pucks, so why wouldn’t an NFL MVP or New York media giant enjoy some bragging rights?