SSZ has highlights of the Manasquan boys and girls basketball teams winning the WOBM Christmas Classic.  The Warriors topped Toms River North 57-50 in the boys final, while the girls made it three straight titles after a 67-56 win over Middletown South

Jack Sheehan scored 9 straight points in the 4th quarter to help Manasquan outscore the Mariners 20-4 in the 4th quarter and win the WOBM boys championship.  Sheehan finished with 14 points and Ryan Jensen had 11 points and an eye popping 27 rebounds.  SSZ has the highlights and post-game reaction from Pine Belt Arena in Toms River: 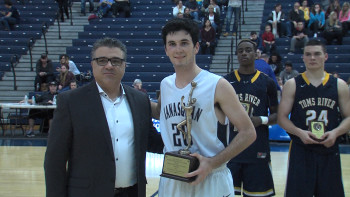 Dara Mabrey scored 21 points and hauled down nine rebounds and freshman Faith Masonius scored 20 as the Lady Warriors won their third straight WOBM Christmas Classic championship.  Manasquan opened up a 20-4 first half advantage and a 40-19 lead at the half, but the Eagles rallied to get as close as six in the second half.  Alexandra Balsamo scored 21 points in a losing effort.  Mabrey was named the MVP, joining her older sisters Michaela and Marina as WOBM MVP’s. 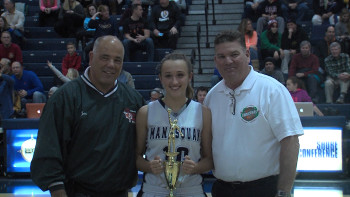