OCEAN TOWNSHIP – Alex Pickett tallied two first half goals to lead Ocean Township to a 3-0 win over Red Bank Catholic, but the final score was not the headline on Thursday night.  The varsity girls soccer matchup was the 3rd annual Mya’s Cup, honoring Mya Lin Terry, who passed away two years ago at the age of 10 from pediatric cancer.   Picketts two goals were in honor of her late cousin. 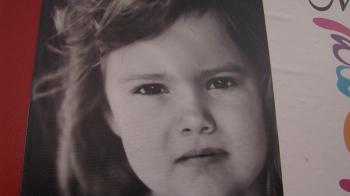 “We were really close growing up so losing her was really hard for me,” Pickett said following the victory.  “Playing this game really means a lot and scoring two goals for her meant a lot.”

The first Mya’s Cup was held to raise money for the Terry family and the tradition continues with proceeds going to help a local family with financial assistance as they battle cancer.  This year’s recipient is Brielle’s Justin Condoluci who is in the midst of his third bout against Acute Lymphoblastic Leukemia. 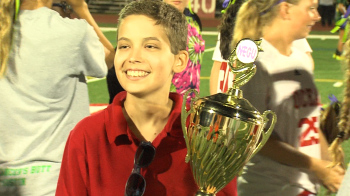 Admission to the game was free and the Mya Lin Terry Foundation took donations and sold raffle tickets, t-shirts and cooked dinner for the crowd on hand to see the Spartans and Caseys.  Sophomore Carla Anderson scored the lone goal of the second half to give the Spartans a 3-0 victory.

“We definitely won before we kicked off,” Ocean Township coach Rob Curran said.  “It definitely gives them an important lesson to give back to the community.  That was one of Mya’s lessons (to pay it forward), hopefully they take these lessons that we’ve learned and use it later in life.”

Tori Lee and Logan Parker, the beneficiaries of last year’s Mya’s Cup were on hand for the third edition and continue to battle cancer. 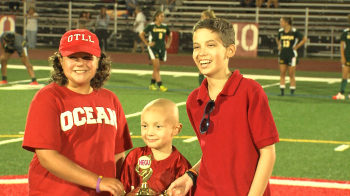 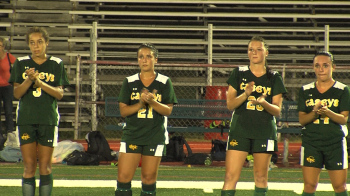