Mater Dei Prep senior Eddie Lewis was one of the big question marks when it came to Division I prospects in New Jersey.  There’s now an answer as Lewis chose the Rutgers Scarlet Knights on Wednesday morning.  Lewis had a dozen Division I offers and in the summer announced his final three as Syracuse, Indiana and Rutgers.  In the end, Lewis chose the Scarlet Knights over the Hoosiers.  Lewis is one of the last pieces of Chris Ash’s 2017 recruiting class as Rutgers gets a speedy wideout who’s a game changer.  No further proof needed than the final play of his high school career which gave Mater Dei Prep its first ever football state championship:

Lewis was a two time SSZ All-Zone selection.  In his senior year, he hauled in 25 catches for 549 yards and 13 touchdowns.  He was also one of the Shore Conference’ most dangerous return men and was a fixture in the Mater Dei Prep secondary.

Lewis becomes the third Shore Conference player to join Chris Ash’s 2017 recruiting class at Rutgers.  Saint John Vianney offensive lineman Micah Clark, considered one of the top offensive line prospects in the country, is already enrolled in classes at Rutgers and will be part of the Scarlet Knights spring practice.  His half-brother, Jamaal Beaty, is also on campus at Rutgers.

Signing Day is a big deal to us here at SSZ.  It’s a chance for us to celebrate the hard work of the athletes we cover every day!  We’ll get all the cameras out and get to as many ceremonies as possible and post interviews and pictures throughout the day.  Here’s what our tour is looking like right now.  We will post pictures and interviews throughout the day so check back here at Shore Sports Zone 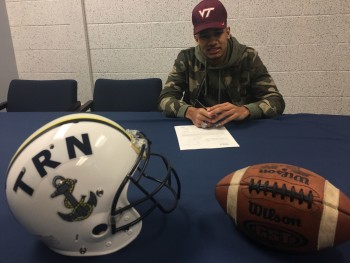