LAKEWOOD – The tickets were taken and the national anthem was played at the home of the Lakewood BlueClaws, but the first pitch never happened in the Shore Conference baseball championship game between CBA and RBC.  The new schedule is as follows:

Wednesday, 4:00 pm at Monmouth University – CBA vs. Bishop Eustace in the South Jersey Non-Public “A” Finals

The state baseball tournament continues to be the top priority and if Wednesday’s action is rained out, the Shore Conference game will continue to be put on the back burner. 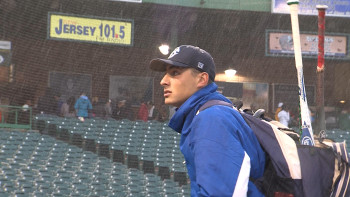 Luca Dalatri was the starting pitcher in Tuesday’s Shore Conference final in Lakewood, but now hopes he gets the ball in Saturday’s state final if CBA wins

CBA has the challenge of playing for two championships at the same time.  Colts ace Luca Dalatri was on the mound at First Energy Park to start against RBC.  Following the rainout, CBA baseball coach Marty Kenney confirmed that Mike Garvey will get the start in Wednesday’s game against Bishop Eustace.  If CBA loses that game, Dalatri will start against RBC on Thursday.  If the Colts advance to the state championship, Dalatri would get the start on Saturday in the title game.

Pitching rules in the NJSIAA would have allowed starting pitchers to start on Tuesday and Saturday.  With the rainouts, Dalatri can only make one start.  As of right now, the plan is to go with the senior right hander Garvey in the state semifinals, with Dalatri available to pitch out of the bullpen.