RED BANK – Brendan Ban had four goals and three assists to lead Rumson-Fair Haven to an 11-3 win over Point Pleasant Beach/Manasquan at the Red Bank Armory.  Rob Garavante added a hat trick for RFH, who raced out to a 6-0 lead and led 7-1 at the end of two periods.

Point Pleasant Beach/Manasquan did not have head coach Jim Dowd behind the bench in the game.  News 12 New Jersey first reported that Dowd is facing an assault charge after a parent accused the former New Jersey Devil of kicking a player in the back during last Wednesday’s game against Red Bank Regional at Jersey Shore Sports Arena.   Assistant coach Tom Matthews was behind the bench on Monday night. 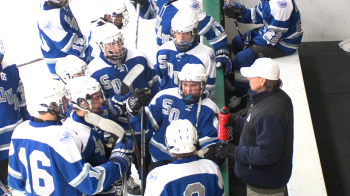