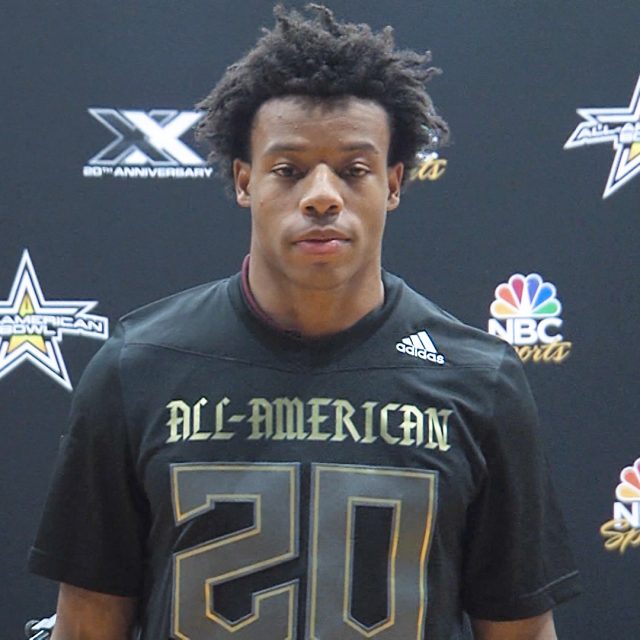 The wait is over. Jalen Berger — a 2019 JSZ Zoneman Finalist and the consensus No. 1 ranked player in New Jersey’s Class of 2020 — has officially announced his commitment to Wisconsin. Berger made his decision official during the NBC broadcast of the 2020 All-American Bowl from the Alamodome in San Antonio, Texas on Saturday afternoon. Committed!! AGTG #OnWisconsin 🦡 pic.twitter.com/cZLXzNhdwq— Jalen Berger (@JalenBerger) January 4, 2020 His announcement caps off a remarkable high school career for a player who was a national recruit courted by most, if not all, of college football’s elite programs. Watch Jalen Berger’s 2019 Highlight Reel HERE The Wisconsin to New Jersey connection is clear. Former Salem High School and South Jersey star running back Jonathan Taylor spent the last three seasons in Madison, putting together one of the best collegiate careers in NCAA history. Taylor was recently named an All-American and Doak Walker Award winner for the second consecutive season. He picked the Badgers over LSU, Penn State, Rutgers, UCLA, Alabama, Ohio State, Oregon and many others. The six-foot, 190-pound Newark native was a dynamic and dominant offensive player in his four-year varsity tenure at perennial North Jersey powerhouse Don Bosco Prep. Although he’s officially listed as a running back, the Ironmen offensive staff used Berger in a multitude of formations. On any given down, he could be found in the backfield, lined up in the slot, cast out wide or even in the shotgun taking a snap. His prowess on the gridiron translated to eye-popping numbers in his senior season. He accounted for 1,081 rushing yards, 338 receiving and 18 total touchdowns while leading his team to the Non-Public Group 4 state championship at MetLife Stadium. Berger headlined New Jersey’s representation at the 2020 All-American Bowl. Joining him were St. Joe’s (Mont.) OL Luke Wypler (Ohio State); St. Peter’s Prep LB Cody Simon (Ohio State); Bergen Catholic DB Jordan Morant (Michigan) and Delran DB RJ Moten (Michigan). Berger was one of six finalists for JSZ’s Zoneman Trophy given to the top high school football player in New Jersey: 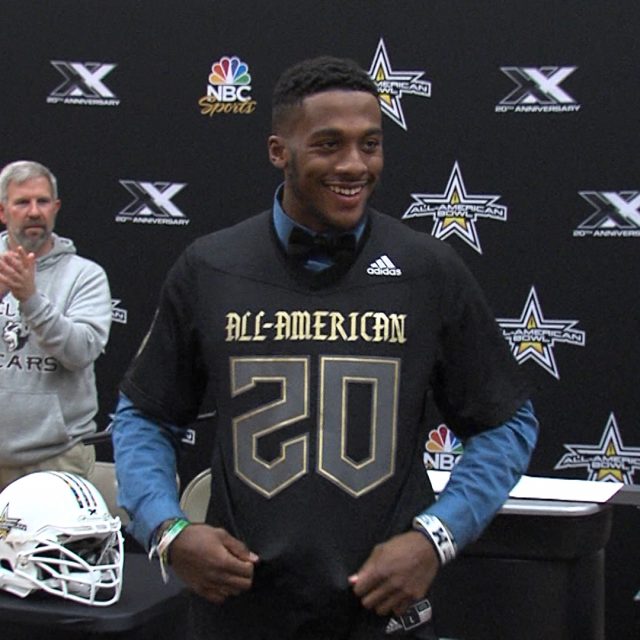 Delran senior standout R.J. Moten received his U.S. Army All-American jersey in front of a packed gymnasium on Friday afternoon. The Michigan recruit is one of just five All-Americans from New Jersey, and the lone player selected from South Jersey. Moten will play in the U.S. Army All-American Bowl in San Antonio, Texas in early January. JSZ’s Mike Frankel was on hand for the jersey presentation and has the story: 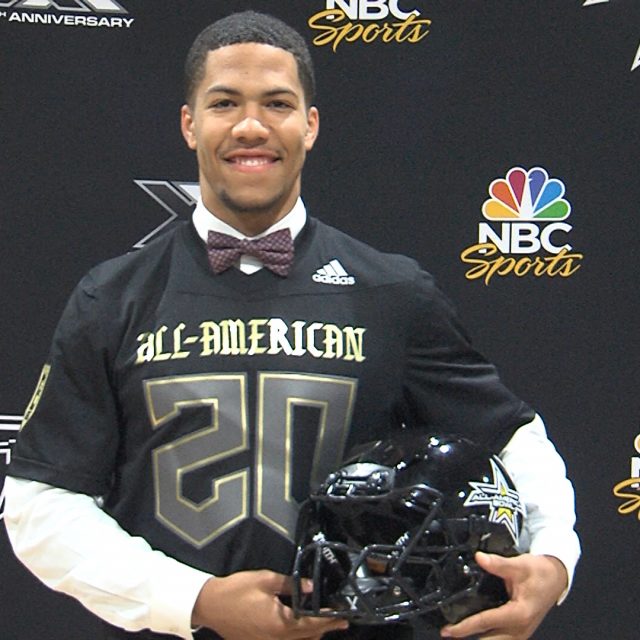 As a sophomore at St. Peter’s Prep, Cody Simon watched his older brother, Shayne, received his All-American jersey. Fast forward two years and now it’s Ohio State-commit Cody Simon unfurling his 2020 All-American Bowl jersey. Outside of being a Top 100 player in the Class of 2020, Simon is a natural born leader who’s accepted the role as team captain and an ambassador on campus. JSZ’s Jay Cook has the story from Jersey City: 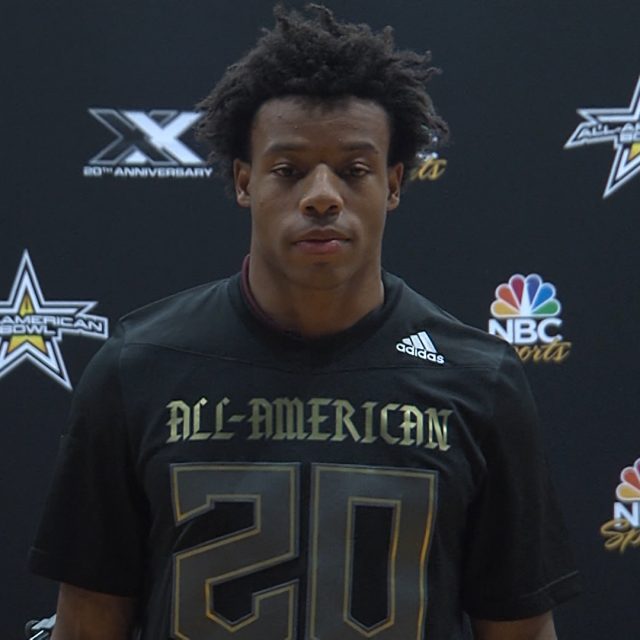 Chapters are continuously being added to Jalen Berger’s prolific high school story. The four-star recruit hailing from Don Bosco Prep became the 11th Ironmen player in school history to be selected to the All-American Bowl — a high school all-star game featuring the Top 100 players in America. Berger, who is among the top uncommitted recruits in the entire country, will make his college commitment public during the NBC broadcast of the All-American Bowl on January 4, 2020 from San Antonio, Texas. JSZ’s Jay Cook has the story from Ramsey: Other New Jersey All-Americans Berger is the third of five Garden State players selected to play in the game. Bergen Catholic DB Jordan Morant and St. Joseph (Mont.) OL Luke Wypler received their jerseys in the past week. 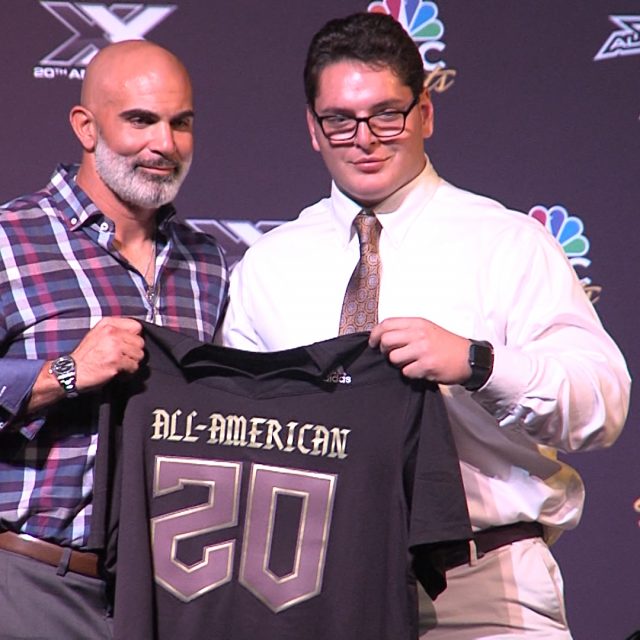 As an eighth-grader, Luke Wypler began dreaming about becoming an All-American athlete. That dream came true on October 11, when Wypler became the second player in St. Joe’s (Mont.) history to earn the honor. Wypler, a four-star recruit committed to Ohio State, is tabbed as the No. 1 players in New Jersey and the top center prospect in the country. It’s easy to see why he’ll be representing the Green Knights in San Antonio, Texas on January 4. JSZ’s Jay Cook has the feature from Montvale: Sponsor Shoutout! Jersey Sports Zone’s coverage of all St. Joe’s (Mont.) athletics is brought to you by Rothman Orthopaedics.